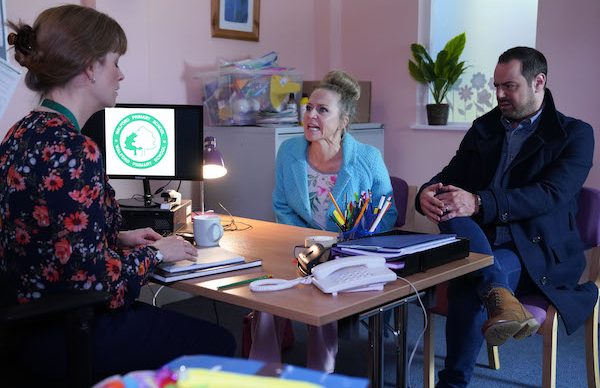 Has she taken it too far?

Linda Carter’s drinking throws her parenting skills into question in next week’s EastEnders when Ollie’s school get in touch to inform her that a social worker has been contacted.

EastEnders fans have watched Linda’s drinking spiralling out of control recently, with her struggling to cope with what was going on at home in the run up to Christmas.

Not only were Mick’s panic attacks causing her concern, but she was also worried about Ollie and his recent Autism diagnosis, leading to her turning to booze for comfort.

However things took a serious turn for the worst over the festive season, with her drinking getting so out of control she found herself caught up in Martin Fowler’s plan to kill Keanu Taylor on behalf of the Mitchells.

As Linda carries the secret that Keanu is still alive around with her, she is constantly hitting the bottle. However it’s not just her marriage that is suffering now, but also her parenting.

Next week sees Linda forget Mick’s birthday and so she throws him a surprise party to make up for the fact she was so inebriated that she forgot her own husband’s big day.

But the temptation to drink is too great at the party, and while everyone celebrates downstairs at the bar, Linda goes upstairs to be with Ollie.

However, she is soon hitting her secret stash of alcohol and Mick is horrified when he goes upstairs and finds little Ollie alone, and Linda nowhere to be found.

Linda’s desperation to drink is so huge that she has left Ollie to fend for himself while she heads off to the Prince Albert in a drunken state.

The following morning Linda is sickened when Mick reminds her that she left their four-year-old son alone, but soon it isn’t just Mick who Linda finds herself having to answer to.

The couple’s argument over Ollie is interrupted by a call from their son’s school, and a teacher explains that a social worker has been informed because Ollie is clearly struggling.

Linda is mortified that her drinking has affected her son so badly, but when they arrive at the school to see his teacher she soon gets defensive about her role as a mother, while Mick is mortified by her behaviour.

Back at home, Mick asks Chantelle to look after Ollie while they sort things out, but drunk Linda is soon acting hysterically at having her son removed from the house, leading to Mick taking drastic measures to protect her.

Can Mick help Linda get on the wagon and become the mum that Ollie needs again?

Or will the family find themselves in more trouble than ever when social services get involved?

Do you think Linda will ever accept the help that she needs? Leave us a comment on our Facebook page @EntertainmentDailyFix and let us know what you think!