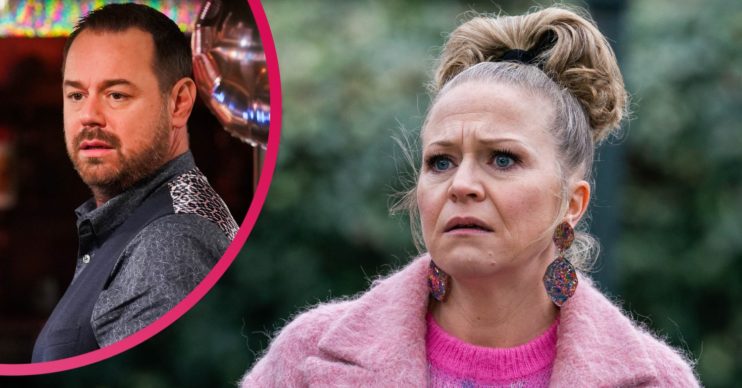 EastEnders SPOILERS: Linda pregnant? But who is the father?

Linda suspects she may be pregnant

EastEnders spoilers reveal Linda thinks she could be pregnant after she feels faint.

In next week’s scenes Linda can’t get to grips with Nancy’s decision and Mick tries to diffuse the situation.

Frankie spots Nancy going to the doctor and tells Mick and Linda.

Mick warns his wife that she’s only making things worse and eventually gets Nancy to cut Linda and Frankie some slack.

Soon Linda is taking matters into her own hands and makes a call pretending to be Nancy.

Later the gym is almost ready for the opening. Sharon and Zack are excited as Frankie arrives to apologise to Nancy, agreeing to do her spin class later.

At the clinic, Linda speaks to Nancy’s doctor, but she suddenly feels faint.

The doctor agrees to check her over, however Linda is forced to admit that she thinks she’s pregnant.

But if she’s pregnant, is there a chance she could be pregnant with Max’s baby?

Back at The Vic, Nancy is furious with Linda’s meddling and soon things turn nasty between the mother and daughter.

Later things are still frosty between Linda and Nancy. Meanwhile Mick meets his ISVA Tom, who updates him on the court case.

Last month Kelie Bright, who plays Linda, announced she is pregnant with her third child after a “rollercoaster” IVF journey.

Kellie, 44, are her husband Paul Stocker, 38, already have two sons, nine-year old Freddie and Gene, who is four.

Kellie welcomed Freddie naturally when she was 34 before having In Vitro Fertilisation in her second pregnancy.