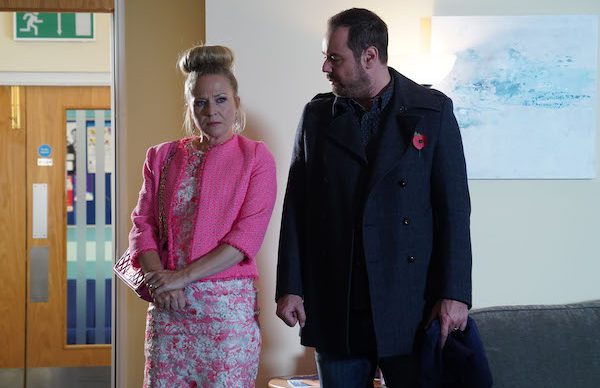 Mick has no idea Linda has been sneaking alcohol

In a preview clip posted on EastEnders’ Twitter page, her balls-up is revealed.

Linda has a lot of making up to do. Again.#EastEnders. Tonight. 8pm. pic.twitter.com/AiWV7qppBj

Linda heads into the kitchen telling Mick no one’s cleaned the barrel store, but she soon notices something’s wrong with Mick and asks if he’s not feeling right.

But Mick doesn’t reply and tells his wife he’s going to get Ollie.

As he goes, Linda looks at the card Mick was reading on the table and sees it’s a birthday card.

Realising she forgot her husband’s birthday, she throws the card on the table.

Will she be able to make it up to him?

Over the last few months, viewers have seen Linda’s drinking get worse.

Read More: EastEnders fans convinced Keanu will be the one to die

On Christmas Day, unbeknownst to Mick, Linda helped Keanu fake his death alongside Martin Fowler, who was hired by Ben to kill Keanu.

On New Year’s, Linda’s drinking got out of hand once again as she went back to a hotel with a man she met whilst in a club.

However, she managed to escape from him when he tried it on with her.

Mick found the hotel on the credit card statement and when Linda found out she entered the hotel with another man she was mortified, especially as she couldn’t remember anything.

Despite telling Mick she would stop drinking, she has been sneaking alcohol.

Will Linda be able to give up the booze?