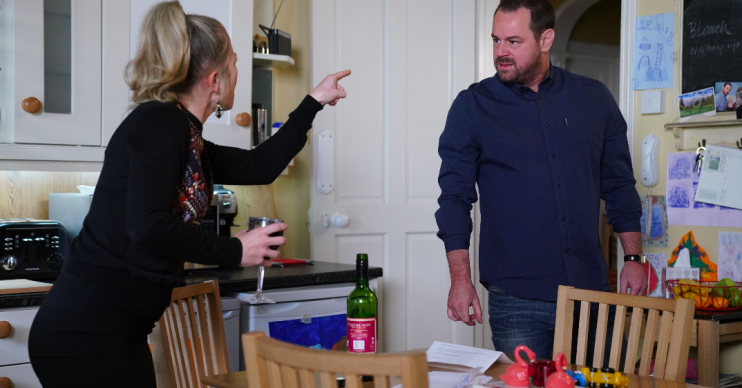 Linda's drinking problem is going to get even worse

Linda Carter is going to attack her husband Mick in harrowing scenes in EastEnders next month.

Alcoholic Linda is in denial about the extent of her drinking and despite trying and failing at Dry January, she’s set to get worse in February.

As Mick tries desperately to make sense of what happened to her, her turns to mum Shirley for support.

But after watching Linda put her son Ollie in danger, Shirley’s in no mood to coddle Linda and tells Mick he needs to put the youngster first.

Viewers know social services are investigating the family over Linda’s drinking and the effect it is having on him.

But despite this, Shirley’s words cut deep to Linda and she lashes out at Mick over them.

He tries to take the bottle of wine off her but she lashes out and he ends up covered in the booze, while Linda launches herself at papers on the wall.

It’s set to be another harrowing month for fans watching Linda’s hard-hitting storyline.

Viewers were left upset last week when Linda got so drunk at Ian Beale’s election party that she wet herself on stage.

Mick was forced to cover her up with his coat and carry her home after seeing their friends and neighbours witness the incident.

A second said: “Linda has totally gone too far, she needs help and Mick, as her husband, needs to book her into rehab, call her mother for a visit or go to the doctors etc with her before it’s too late!”

A third said: “I’ve been rewinding @bbceastenders for about an hour now. Linda [expletive] herself was too much.”

Fans were shocked this month when filming pictures showed Linda back on the booze next month with potentially fatal consequences.

What do you make of the storyline? Leave us a comment on our Facebook page @EntertainmentDailyFix and let us know what you think!