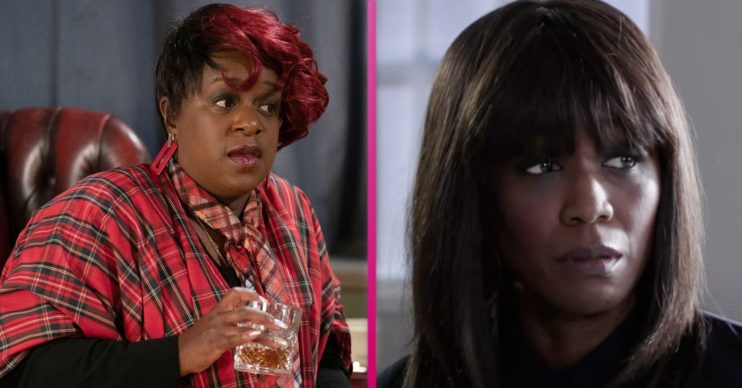 EastEnders spoilers reveal Kim Fox makes her back to Walford after over a year away.

Last year, Kim told her sister Denise she was moving to Scotland with her children Pearl and Mica.

In next week’s scenes with the support of Jack, Denise musters up the courage to tell Raymond that she is his birth mother.

But there’s an even bigger shock when Kim walks through the door.

Later Denise is about to tell her sister about Raymond. But when Raymond totters in, Kim is dumbfounded.

Kim encourages Denise to pursue her relationship with Jack as it’s clear they both still have feelings for each other.

Will Denise listen to Kim?

Last year, Tameka left EastEnders and her character Kim went off to Scotland. But Tameka didn’t explain the reason for her exit.

However in July this year, the actress revealed the reason she took a break was because she had given birth to her second child, a son.

Speaking on Loose Women, the actress, who also had a daughter, said: “Yes I’ve had a baby boy. A bouncing baby boy.”

Tameka admitted it wasn’t a deliberate decision to keep her second pregnancy a secret, but she just wanted some time to enjoy it herself.

She said: “It wasn’t so much deliberate, I just wanted to enjoy it.

Yes I’ve had a baby boy. A bouncing baby boy.

“I think sometimes when something like a baby comes along you just want to enjoy it before every says ‘how’s he doing?’

Read more: EastEnders: Fans fear Tiffany and Keegan will split after she agrees to be Rainie and Stuart’s surrogate

“I just wanted to enjoy it for the time, so it wasn’t a secret as such but now he’s here and he’s loud everybody knows.”

Earlier this year, Tameka appeared alongside Denise actress Diane Parish in an episode of EastEnders: Secrets From The Square.

Are you looking forward to Kim’s return? Leave us a comment on our Facebook page @EntertainmentDailyFix and let us know what you think of this story.