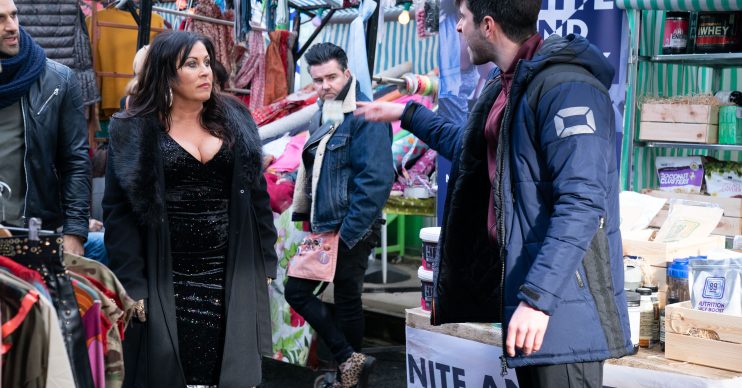 Fans of EastEnders can expect a fiery clash on the market and more as Kat Moon takes on twisted Leo King, as his stalking and harassment of poor Whitney Dean continues.

Leo (played by Tom Wells) deliberately riles the leopard print queen of the square (played by Jessie Wallace), resulting in a clash when she stands in for Whitney on her stall in the market.

Not being able to resist making his presence felt, Leo will provoke Kat, but in true Slater/Moon style she will continue to give as good as she gets.

The scenes, which will air on Monday January 27, will show the two characters get nastier as their feud sparks with a mouthy exchange on the market in front of the Albert Square locals.

Leo has taken up residence on the market and his new stall is, coincidentally, directly opposite Whitney’s, so he can continue to make her life a living hell – but not if Kat can help it.

She’s even swapped jobs with Whitney to try and protect her, but that only angers Leo further and potentially puts Kat and those she loves in the firing line for Leo’s next steps.

This latest attack from Leo comes after his concerted efforts to make Whitney Dean (played by Shona McGarty) fall apart as he takes apart her life bit by bit.

Fans of EastEnders have already seen him beat and verbally abuse her, as his true identity of the son of paedophile Tony King was revealed.

Yet since when has bolshy Kat ever let anyone get away with hurting one of her own? Leo may have met his match in Kat, and she’ll make sure he knows it but not before he tries to bring her down too.

As a result of their very public clash in the market, Kat’s cleaning business will also come under fire from the conniving Leo, as he tries to deliberately sabotage it.

Scenes will show Kat in talks with a new client for her business before the extent of Leo’s malicious meddling becomes clear as the meeting continues.

Taking on the Slater/Moon icon is a brave move for Leo, but could it be that he has finally met his match as Kat won’t let an attack on her and her business go down without a fight.

Will it be long before Leo comes after Kush or other members of the Slater clan as he continues to hurt Whitney in any way he can?

The next steps in Leo’s plan could leave viewers guessing as they’ve seen strange moves from him already, including a misguided romance with troublemaker Dotty Cotton in an attempt to make Whitney jealous.

What do you think of Leo King vs. Kat Moon? Leave us a comment on our Facebook page @EntertainmentDailyFix and let us know what you think of this story.