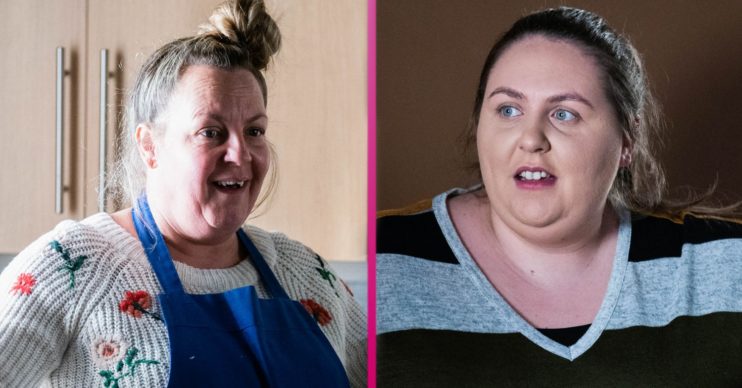 Bernie meets a girl next week

EastEnders spoilers reveal there are potential new love interests for both Karen and her daughter Bernie.

A couple of weeks ago, Karen was furious when she found out the man she was on a date with, ‘Jordan’, was actually serial killer Lucas.

But could she find her perfect man when she goes on a date?

In next week’s scenes Bailey admits that she won the science competition but didn’t want the cost of attending the camp to worry anyone.

Bernie soon spots a girl passing out missing dog flyers and Bailey encourages her to introduce herself.

Read more: EastEnders actor Danny Dyer to have surgery on testicle after it swells to size of ‘jacket potato’

Bernie approaches the girl who introduces herself as Molly. Bernie feels flustered, but her heart drops when she sees the missing dog is Banjo.

Later, Molly offers to buy Bernie a drink. Cold this be the start of a new romance?

Bailey has to admit to Mitch that she won the science competition. He assures her that they’ll find the money for her to go to the camp.

She insists they give Banjo back to his owners and Bernie goes with her to meet Molly, she’ll try to get the reward money for Bailey’s camp.

Karen has a date?

After putting off a chat with her boss, Karen meets Mitch and Bernie at Walford East as they await Gray’s arrival – It’s Chantelle’s birthday.

Meanwhile Gray downs whisky at The Vic and texts Karen that he’s been held up at work. Tiff and Keegan are at the club and can’t believe their eyes when Gray turns up drunk.

Whilst at the chippy, the rest of the Taylor’s share memories of Chantelle and Bernie encourages to see her boss Apostolos later – it sounds like a date!

Could this also be a new romance for Karen?