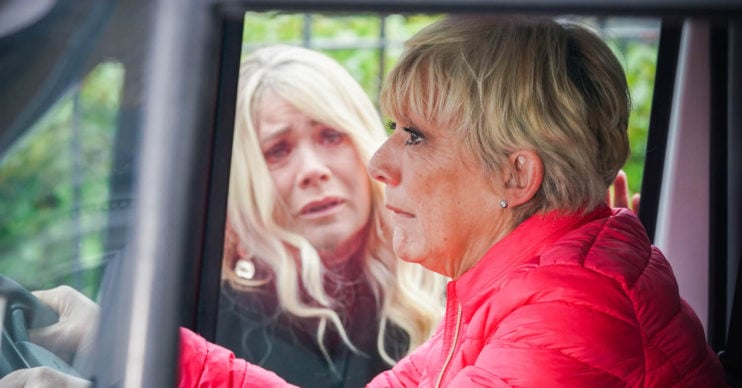 EastEnders’ Jean Slater will go to desperate lengths as she spirals out of control.

With her daughter Stacey now in prison for a crime she didn’t commit, Jean is struggling to cope.

And when Stacey’s children decided to move in with their dad Martin and his wife Ruby, Jean broke down sobbing.

Now, Jean will go fully off the rails.

Sharon’s excited about her new gym, but isn’t happy when Jean’s cleaning isn’t up to scratch.

Little does she know, Jean is beside herself with worry over Stacey.

Soon, Jean starts acting out of character when she steals a delivery van and crashes it.

Sharon tries to talk Jean round, while also having to sweet talk the delivery driver into letting it go.

Sharon opens up about her new-found brother and soon, Jean is given an idea.

But what will she do?

Is Jean Slater dying in EastEnders?

Jean found a lump earlier this year, just months after she beat cancer.

She later went to the doctor for a biopsy, but she was unable to go through with it and fled from the appointment.

Later Jean made a video for her family explaining she knew her cancer was back and she didn’t want any treatment. However, it seems she never showed her family the video.

Whilst Jean does believe her cancer is back, it’s worth noting that she didn’t actually get the results from the doctor.

It has not been revealed if Jean does die or if actress Gillian Wright is leaving.

One said: “Jean never got her results (if she even had the tests). She’s only saying what she believes to be true. #Eastenders.”

A second said: “Jean’s going to look a right fool once it turns out she isn’t dying. #EastEnders.”

“I’m sure Jean is lying about the cancer so the charges get dropped #eastenders,” said another.