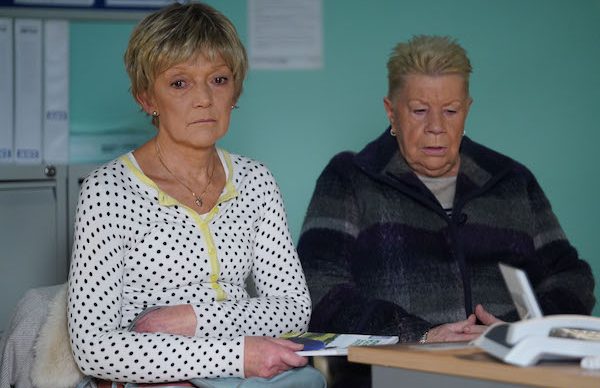 EastEnders SPOILERS: Jean gets a shock while spending time with Daniel

Jean is in for a double shock next week

Next week’s EastEnders sees Jean Slater dealt two shocks that will both change her life forever… but how is Daniel involved in the drama?

Jean has been making the most of her time left with boyfriend Daniel Cook ever since the doctors told him he only had weeks to live.

The pair have spent their remaining time together ticking things off Daniel’s bucket list and making memories that will stay with them forever… however they’re both very aware that their time left as a couple is short.

Next week sees Jean frustrated as Daniel continues to make light of his condition, and while she knows that joking is his way of coping with what is about to happen to him, Jean can’t help but worry about what lies ahead.

Things suddenly get very serious between the pair when a visit from the nurse reveals that the hospice that Daniel is staying in is closing, leading Jean to invite him to live with her for his final days.

Daniel is touched and couldn’t think of a better place to be, and soon Jean is coming up with a plan to cheer him up when he has a bad day.

However, a phone call is set to change everything, and the mystery deepens when Jean then enlists Kush and Mo to help her with a plan.

Later Jean presents Daniel with a surprise, but it is her turn to be left touched when Daniel admits how much she means to him and reveals that he won’t allow himself to die before he knows she is okay and her cancer has gone.

But on the day of her oncology appointment, Jean is fearing the worst and reluctant to go.

It’s only when Daniel offers some words of encouragement that she finally bites the bullet and heads to the appointment with Mo.

Once there Jean is overwhelmed to learn that her MRI scan came back clear and struggles to process the news that she has been given the all clear.

However, she knows that this means Daniel can now die happy, and so she keeps the news from him, lying that she has to wait a bit longer for her test results to come through.

But Mo doesn’t realise what Jean has said and puts her foot in it by letting slip that Jean has been given good news.

Later Jean and Daniel spend the afternoon together, but when Jean heads off to get Daniel a drink, she is stunned by what she finds when she gets back.

With the all-clear news and then this shock with Daniel, Jean’s world has been turned upside down twice in one day… but what does she find that leaves her so stunned?

What do you think Jean finds? Leave us a comment on our Facebook page @EntertainmentDailyFix and let us know what you think!