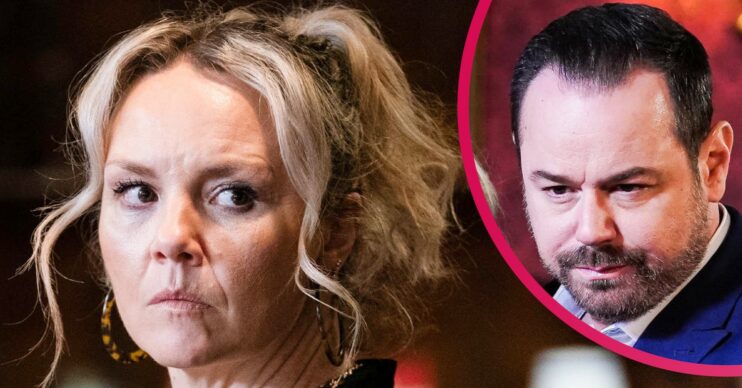 EastEnders spoilers for next week reveal Janine plans to leave Walford when she finds out some surprising news about Mick and Whitney.

But will she actually leave?

As the week begins it is clear Mick is avoiding Janine. She wakes up without him beside her and she is worried about their relationship.

Janine confides in Billy about what’s going on, confessing they haven’t been intimate with each other yet.

She later decides to confront Mick about the issues, but he doesn’t want to talk about it. He does, however, confess his troubles to Mitch.

Mitch feels a bit awkward, but eventually offers his support to Mick. The landlord opens up and reveals his mind is stopping him from getting close to Janine.

Mitch tries to give Mick some advice, but will it help?

Meanwhile, Janine is painfully aware Mick is still avoiding her when he goes for a run to get away.

She tries to put a brave face on and help Billy celebrate his birthday, but her ex lets slip some information which quickly sours the mood.

Billy tells her Mick and Whitney once had a thing.

She warns Whitney away from Mick, but what will Whitney say?

After the bombshell revelation Janine makes one last ditch attempt to seduce Mick. But when it fails she makes a big decision.

Janine tells Billy if she wins custody of Scarlett, she is leaving Walford.

EastEnders spoilers reveal Janine sets about trying to distance herself from Mick. She tells him not to come to the hearing for Scarlett as she doesn’t want his support.

But Frankie has picked up on the atmosphere and tells her dad to do something romantic for Janine. He takes her on a date, but will it convince Janine to stay?

Disaster strikes when her clothes shrink in the wash. And Janine’s idea to save the day quickly backfires…

Although she and Mick laugh off the incident, he soon makes an admission that sends Janine reeling.

The couple are then united as they head to Scarlett’s hearing together, but with the cracks clearly there, how much longer can they keep up the act?

Will they make a go of this for real?

Or will Janine leave Walford for good this time?