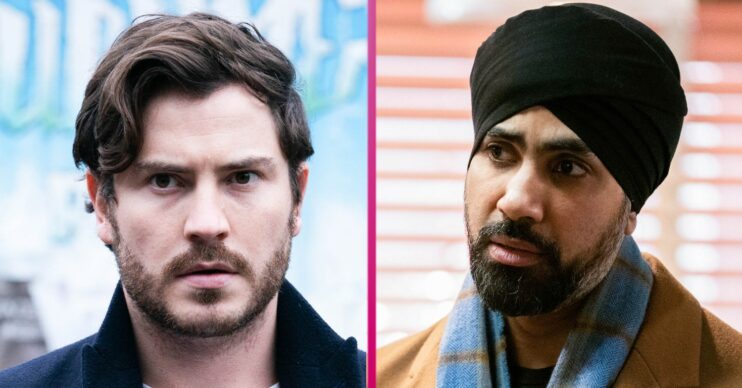 EastEnders SPOILERS: Is Gray dead after being hit over the head by Kheerat?

Kheerat and Gray got into a huge fight

EastEnders character Gray was hit over the head by Kheerat in tonight’s episode (Monday, February 21 2022), but is he dead?

Recently Gray has been receiving emails from an email address under Chantelle’s name.

Tonight Gray called Kheerat and asked him to come over, making out her urgently needed a lift to the hospital to see his son Jordan.

Believing he could get Gray to admit the truth, Kheerat went over and after talking to Chelsea about Jordan, Whitney realised Kheerat had been played and was potentially in danger.

Over at Gray’s house, Kheerat and Gray began to argue as Gray accused him of making up lies.

The two men soon began to fight and Kheerat ended up hitting Gray over the head with a glass bottle.

Gray was left unconscious on the floor, but is he dead?

EastEnders: What’s next for Gray and Kheerat?

While it’s not been revealed if Gray will survive the knock over the head or not, Whitney is left worried as she waits for Kheerat to get in contact.

Later this week, Whitney anxiously waits for Kheerat to call her.

Stacey notices and asks if it’s Kheerat she’s waiting for. She hides her hurt when Whitney admits she is waiting for Kheerat, but she has no idea what’s really going on.

Have you been watching EastEnders? Leave us a comment on our Facebook page @EntertainmentDailyFix and let us know what you think.