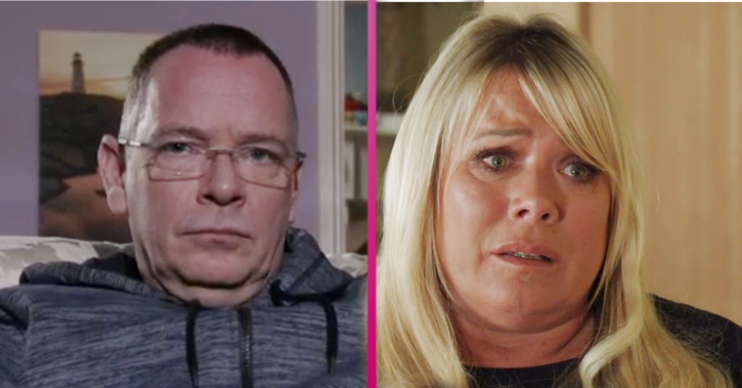 EastEnders SPOILERS: Ian to confess all to Sharon about Dennis in lockdown?

EastEnders is currently off air, but Ian Beale actor Adam Woodyatt talked about what’s to come when the show resumes later this year. Will Sharon learn the truth about the death of son Dennis?

In tonight’s episode (Monday, July 27) of EastEnders: Secrets from the Square, Stacey Dooley sat down with Adam and his on-screen mum Kathy Beale, played by Gillian Taylforth.

Towards the end of the episode, Stacey asked the stars to tease what’s to come for their characters.

Adam confessed to Stacey: “He’s been locked in The Vic with Sharon and the baby. Ian’s still got the guilt over what happened to Dennis. Lies will eventually, they’ve got to come back and bite him.”

Will Ian confess that he inadvertently played a part in Dennis’s death? Or will the truth come out another way?

What’s coming up for Kathy in EastEnders?

Meanwhile, Gillian revealed there could be romance ahead for Kathy as she goes on a dating app.

The actress teased: “Kathy is going to go on a dating app and I think you know it’s about time. She’s older now and she’s been looking after everybody else, it’s about time she was looked after.

“You know, about time she had a bit of love in her life. A nice gent in her life, who knows, she could meet the man of her dreams?”

Where did we last leave Ian and Sharon?

The last viewers saw of Ian and Sharon, she had just bought The Queen Vic from the Carters, much to the dismay of Phil Mitchell.

Sharon has been wanting to move back into her childhood home ever since losing her son Dennis back in February’s boat crash.

Ian locked Dennis in a room on the lower deck of the boat, planning to take him to the police for bullying his son Bobby.

But when the boat crashed, Ian made a desperate attempt to save Dennis. However the teenager ended up drowning.

Will Sharon ever find out the truth about Ian’s part in her son’s death?