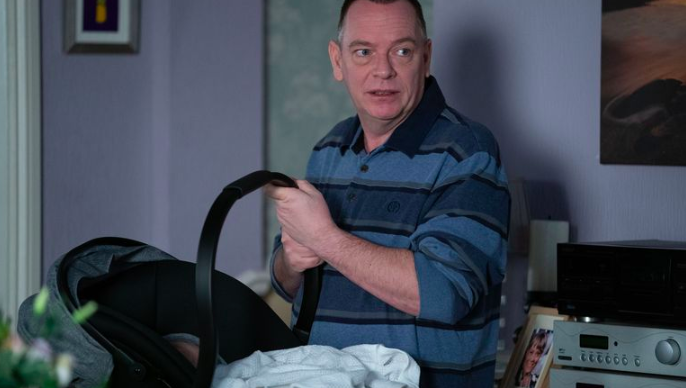 Is it all getting too much for Ian to cope with?

Ian Beale’s guilt is going to get the better of him next week in EastEnders.

Chippy owner Ian was responsible for Dennis Rickman’s death after locking him in a room below deck and waiting too long to release him as the ship sank.

Dennis tragically died as his mother Sharon went into labour with her newborn baby son.

And even though Ian was devastated to hear that Dennis had died after they were both swept away into the Thames, he failed to confess what he had done to his mother Kathy.

Instead he just cried as she called him a hero leaving her with the impression that she was right and he hadn’t caused Dennis’ death.

But next week things are going to become more difficult for Ian as Sharon is released from the hospital with her baby.

Grieving Sharon will barely be able to cope as she wanders Albert Square in what should be the happiest time of her life.

Instead of celebrating her new baby, she’s in turmoil about Dennis’ death and she blames herself.

And even thought Ian could make it all better by confessing his role in Dennis’ death, he doesn’t and instead Sharon is left to suffer in her own misery.

Even when he sees the full horror of what Sharon is going through, and knowing the pain of losing a child himself, Ian stops himself from confessing.

Spoilers released prior to the boat disaster revealed that a killer would try to cover their tracks in the aftermath of the death.

Fans know that Ian is at risk of being exposed after Dennis left his mum a voice note telling her how Ian had locked him in a room on the ship and wouldn’t let him out.

Sharon was too busy giving birth in the funeral home having been taken hostage by a gun-toting Ben Mitchell to notice the message before but as the drama dies down, will she find it?

Or will Ian realise what Dennis did and work to delete the voice note before Sharon hears it, making sure his secret won’t come out?

Do you think Ian will confess? Leave us a comment on our Facebook page @EntertainmentDailyFix and let us know what you think!