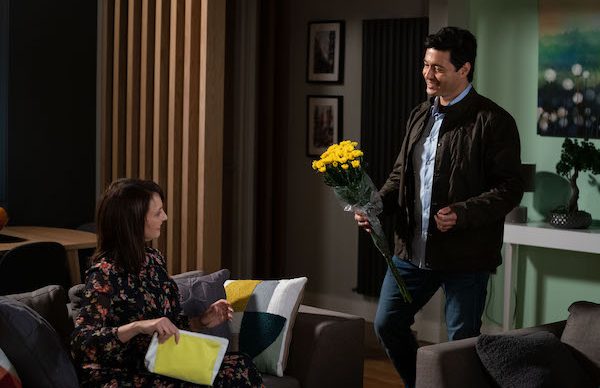 Is this the end for Honey and Adam?

Honey Mitchell finally confronts cheating Adam Bateman in next week’s EastEnders when the reality that he is never going to stop cheating hits her.

It was initially her ex husband Billy Mitchell who told Honey about Adam playing away, but she buried her head in the sand and pretended it wasn’t happening.

Later, when the truth about Adam’s affair with family friend Habiba Ahmed came out, Honey finally realised that Adam wasn’t the man she thought he was, but still she didn’t want to rock the boat by leaving him.

However, next week’s EastEnders sees Honey getting fed up with Adam’s cheating and she finally confronts him about what has been going on right under her nose.

Adam’s lies start to catch up with him when he covers his tracks as Iqra quizzes him about where he has been.

He later cancels plans to see Honey, leaving her upset because she knows that he is lying and secretly going to meet another woman.

Deciding to distract herself and bury her head in the sand, Honey heads to The Vic to help Mick… but when Iqra asks her about Adam’s secretary ‘Sally’ her worst fears are confirmed because she knows for a fact that Adam doesn’t have a secretary.

Knowing for sure that Adam is doing the dirty once again, Honey decides to quiz Adam about his cheating and he quickly realises that she is on to him.

But instead of holding his hands up and coming clean, Adam continues to lie and deflects Honey’s questioning, leaving her frustrated.

But when Honey later sees Adam flirting at the bar in The Vic, something inside her snaps and she’s had enough.

Deciding to take matters into her own hands, Honey makes a shock move…

Will Honey out Adam’s cheating to the world? Or has she got something else entirely up her sleeve?

Will you be pleased to see Adam get his comeuppance? Leave us a comment on our Facebook page @EntertainmentDailyFix and let us know what you think!