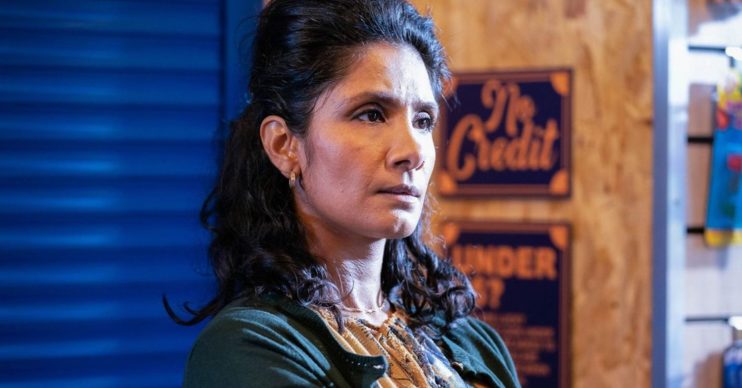 Viewers will see Suki in a new light

EastEnders spoilers have revealed the soap will air a heartbreaking racism storyline which will see viewers understand villain Suki Panesar’s tragic past.

Scheming Suki has shown herself to be a force to be reckoned with in the Square over the past year.

But under her hard exterior, there have been hints of a tragic past – and now the soap will address that in a heartbreaking racism storyline.

Actress Balvinder Sopal has revealed how an incident of racist graffiti left on her shop leaves Suki devastated.

It brings up all of the hatred and the idea that is doesn’t matter what you do, you will never be accepted.

She said: “It just highlights that no matter how ingrained or embedded or part of the community they feel they are, moments like this will always ostracise them and ‘other’ them.

“That’s what racism does, it doesn’t put them on an equal footing.

“It brings up all of the hatred and the idea that is doesn’t matter what you do, you will never be accepted.

“It’s so tiring and just heartbreaking.”

She continued: “There they are working day and night, serving the community. And still they think they have the right to behave in that way.”

Furthermore, Balvinder added: “Racism is a cancer within our society.

“It makes people do really crazy and horrible things on both sides. It just opens up a whole lot of wounds for her.”

The storyline will even go some way to making fans understand Suki and feel empathy for her.

“It makes her a rounded character with feelings and emotions,” she added.

“You start to understand why she is the way she is, because she builds up this wall around herself.”

She added: “Also, coming from a Punjabi family, any woman bringing up her children on her own in that time faced some kind of hardship.

“She’s built her family and herself up so that nobody could say anything, and just trample over anybody to get what she wants, because she’s had to not because she wants to.”

Balvinder added: “But in that sense, she’s hardened herself quite a bit.

“So having all of this racist stuff come back up again has taken them right back to that moment where things had fallen apart for them.”

However, she added: “It’s absolutely shown a softer side to her.

“It’s great to be able to show that. Hopefully there will be a lot more of that complexity in the character.”