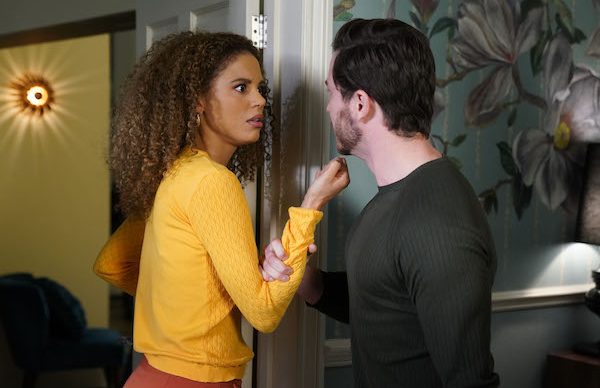 Things are getting worse between them

Gray Atkins’ abuse of wife Chantelle is set to take a sinister turn at the start of next year in EastEnders as his jealousy continues to get the better of him.

EastEnders fans have watched the pair renew their wedding vows over Christmas, leaving their friends and family believing that they are head over heels in love… but viewers know the couple are hiding a dark secret.

Despite going to counselling, Gray is still being abusive towards Chantelle and it is clear he is determined they are going to have another baby together.

As the couple return from their honeymoon, Gray suggests that Chantelle takes a pregnancy test but she tries to brush him off by telling him that it is too early.

But Gray isn’t going to be put off that easily and tells Chantelle they’re going to try again for a baby, before leading her upstairs .

However, Gray’s good mood is soon shattered when he later spots Chantelle chatting to Jags.

Watching his wife from across the square, Gray’s blood is boiling as he sees Jags telling Chantelle that he has moved to the Square as Chantelle helps him home with his shopping bags.

But Gray’s bad mood only gets worse when Chantelle finally takes the pregnancy test that he has been badgering her about and it turns out to be negative.

While Chantelle is secretly relieved, Gray is annoyed by her attitude and grabs her wrist as she tries to walk away, seriously hurting her in the process.

As he pulls his wife closer to him, it is clear that Chantelle is in a huge amount of pain, but will he do anything to help her?

It seems that the fact Chantelle is so badly hurt doesn’t phase Gray, because the following day he is quizzing her about Jags, prompting Chantelle to keep her distance from the Panesars.

Knowing that speaking to them makes Gray angry, Chantelle panics when Jags and Vinny arrive for a visit and Jags tries to flirt with her.

Eventually Kheerat arriving is the final straw for her and she abruptly demands they all go, leaving everyone baffled by her sudden outburst.

But while Chantelle is secretly trying to keep Gray happy so he doesn’t hurt her again, will anyone else work out what is going on behind the closed doors of Number 1 Albert Square?

Who do you think will be the first to work out Gray is abusing Chantelle? Leave us a comment on our Facebook page @EntertainmentDailyFix and let us know what you think!