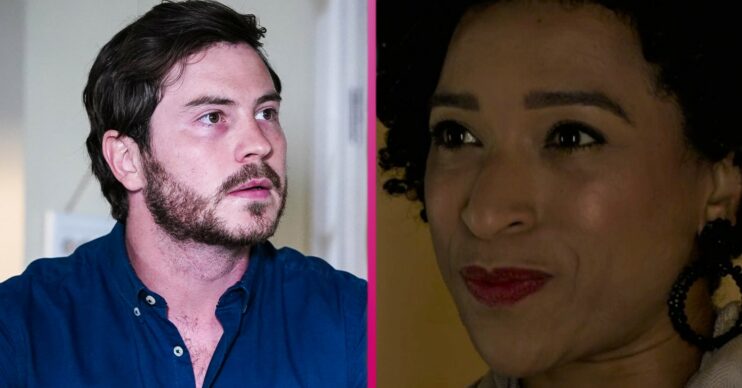 EastEnders spoilers for next week reveal Gray is furious when he gets fired from his job, but will he kill again?

It was recently revealed Gray’s boss Laura isn’t his biggest fan. Furious, he began sending her cruel messages on Twitter anonymously, but how will he react when she fires him?

In next week’s scenes Gray’s money problems are getting worse. His boss Laura arrives with a HR rep informing him that he’s been fired due to the caution he received last month.

How will Gray react? Could Laura be in danger?

Meanwhile, outside the café, Chelsea brags about the clothes Gray brought her to a friend. Gray soon confronts her with his credit card bill.

However Chelsea is unbothered and says it’s not her problem.

In the Vic, raging from earlier events Gray calls Shirley over to tell her he saw Tina on a bus.

Later Mick and Shirley visit Gray and ask him to relay everything he knows about Tina.

Later Shirley promises Mick that Sharon and Phil are going down unless they confess about their plan with Ian.

Phil returns home from seeing Louise and Lisa and is immediately displeased with the new Arches sign.

Ben tries to explain himself but is interrupted when Shirley walks in telling Phil to hand himself in for what he did to Ian.

Sharon confides in Phil about her guilt over Ian, explaining Linda and Shirley are also pressuring her to tell the truth.

She suggests they go to the police but Phil reminds her she could face time in prison.

Later Phil worries when he gets hold of Sharon, so he leaves her a warning not to do anything stupid.