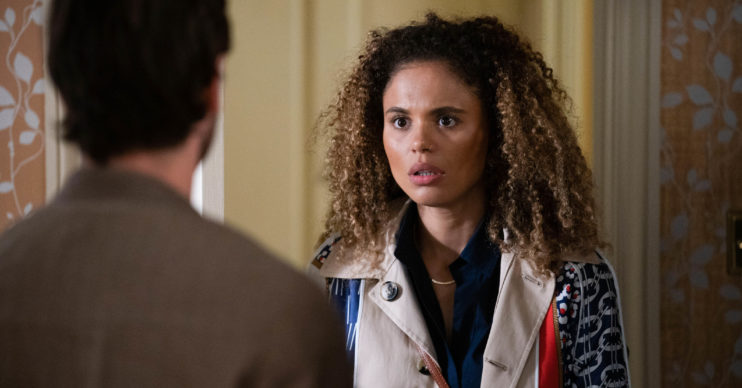 The devastating twist in Gray’s abuse of long-suffering wife Chantelle comes when her plan to escape goes devastatingly wrong.

After years of abuse at the hands of her husband, EastEnders favourite, Chantelle, has found the courage over lockdown to plan her escape.

As she puts the finishing touches into place, Chantelle packs as much as she can for a ‘family holiday’.

But while Gray and the Taylors think they’re escaping Walford to spend a few days at the seaside, this is Chantelle’s chance to run from her toxic marriage.

When the Taylors arrive with their bags packed for the trip, Chantelle begs Gray to let her go.

She then heads over to see Kheerat to reveal that she isn’t planing to come back to Walford.

But while Chantelle is finally starting to see a light at the end of the tunnel, Gray is one step ahead of her and tells her she can go – but the kids are staying at home with him.

Chantelle has no choice but to leave Walford without Mia and Mack… and she’s devastated.

Mitch is suspicious of Gray

Mitch realises something isn’t right with his daughter, but despite being tempted to share her secrets with her dad, Chantelle lies and pretends she just misses the kids.

Mitch offers to go home and get Mia and Mack, and Chantelle is thrilled when he returns with her children.

But her happiness is short-lived when she sees that Gray has also come with them.

Horrified that her escape plan is in tatters, Chantelle silently panics. But her family are oblivious to her turmoil.

As Chantelle calls Kheerat, she has no idea that Gray has overheard the whole thing… and he’s fuming.

Gray confronts Chantelle and she is sickened when he orders her to come back to Walford with him and the kids.

With no choice but to do as her controlling husband says, Chantelle heads home. But as she leaves, Mitch sees fear on her face.

Back in Albert Square things turn sinister when Chantelle finds the courage to tell her husband that she’s leaving him.

The news doesn’t go down well and Chantelle has no idea she has just signed her own death warrant.

As Gray’s anger escalates the horror that Chantelle has been living for so many years becomes worse than she could ever possibly imagine.

As Chantelle tragically ends up dead at the hands of her evil husband, will anyone ever work out what went on behind the closed doors or number one Albert Square?