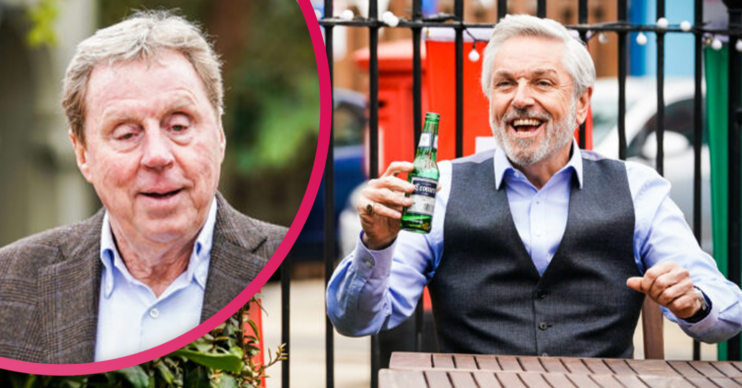 Harry has long lobbied for an appearance on the soap

EastEnders has revealed the first look at Harry Redknapp appearing on the soap in a series of new spoilers.

The legendary football manager will make an upcoming appearance on the BBC soap as part of the Euro 2020 schedules.

Pictures released by the BBC show Harry arriving in the Square to shock from locals.

EastEnders SPOILERS: What is Harry Redknapp doing in Albert Square?

It can now be revealed that Brian Conley’s character Rocky is the one who brings him to the Square.

The pair are described as old pals as Harry rocks up to visit.

He is set to cause a stir with the Albert Square residents as they celebrate the Euros.

Harry’s appearance in EastEnders will air on Friday July 9 on BBC One, ahead of the Euro 2020 final.

It was previously revealed that Harry would have scenes with Danny Dyer’s Mick Carter.

Harry Redknapp on his EastEnders appearance

The I’m a Celebrity star confirmed the cameo to The Sun and said: “I’ve always wanted to have a drink in the Queen Vic. Danny Dyer was terrific to work with.”

However, a source added to the publication: “Harry has made no secret of the fact he wanted to be in the show. Mick likes wearing his West Ham shirt so I’m sure they’ll swap some Cockney banter about the Hammers.

“They made him feel so welcome and he felt really at home. He only has eight lines but he plays them as himself – not as a character.”

Harry lobbied for part in EastEnders

Back in January Harry was lobbying to get himself an appearance on the show.

He even revealed how he’d written his own script for the cameo – just in case.

“My ambition for 2021 is to get a part in EastEnders because I’m a real East Ender,” he said.

“I grew up in Poplar, so I have a real affinity with the area.

“I’ve worked out my character and this is the scene.”

Read more: EastEnders SPOILERS: Suki Panesar to show ‘softer side’ as Vinny fights for his life

However, he added: “They’re at the bar and one of ‘em says: ‘You heard Redknapp has moved back in the area?’ And another says: ‘Nah he’s moved to that posh Sandbanks’.

“I come into the pub. Mick says: ‘Harry is back ‘cause we’re starting up a little business – bit of this, bit of that’.”