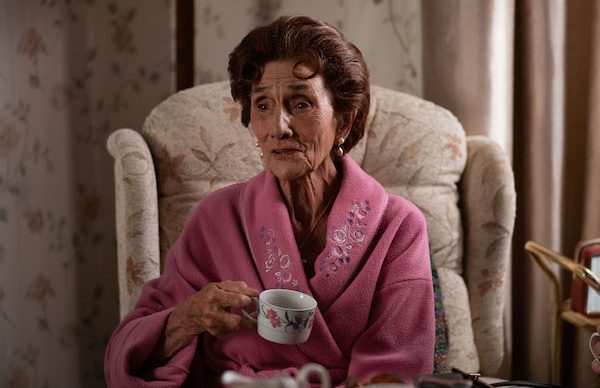 It’s the 6000th episode of EastEnders tonight (03.10.19), so it seems fitting that a true Walford legend should return.

Dot Cotton is back… and she’s not alone. She will also be bringing granddaughter Dotty with her… and there’s trouble on the cards.

EastEnders just isn’t the same without the matriarch of Albert Square in residence, but thankfully for all Dot fans,  order is about to be restored.

As Bex Fowler reluctantly prepares for her big move to Oxford University, Dot arrives in the middle of her farewell celebrations and causes a distraction by announcing that her granddaughter Dotty is with her.

Read more: EastEnders’ Keegan accused of lying to Tiffany about being a virgin

The pair have returned to Albert Square having spent the summer together in Wales… but with Dotty being Nasty Nick’s daughter, no one is exactly welcoming her with open arms.

Wary of what devil child Dotty has developed into since she was last in Walford 10 years ago, everyone fusses around Dot as she fills them in on what she has been doing since her departure from the Square earlier this year.

It soon transpires that Dotty will be going to a university in London and using Dot’s house as her base… but is she really the squeaky clean student she is pretending to be?

Tiffany is instantly wary of the new girl on the block and isn’t happy when she realises she is planning to stick around in Walford for the foreseeable… but could these two become arch enemies or best buddies?

As Dot makes her self at home once again, Dotty soon finds herself caught up in the drama of the week when a desperate Bex tries to take her own life as the pressures of going to Oxford become too much.

As her friends and family are left reeling when they find a suicide note in her bedroom, Dotty gets involved in the drama when she tells everyone that pills were also found in Bex’s bedroom.

Read more: EastEnders fans fear Sharon will lose her baby as Mel vows to destroy her

But is Dotty just worried, or stirring up trouble?

With Bex’s fight against the stress of being the perfect straight A student getting too much, maybe fellow uni student Dotty could be the one to help her?

Do you think Dotty will bring trouble to Walford? Leave us a comment on our Facebook page @EntertainmentDailyFix and let us know what you think!