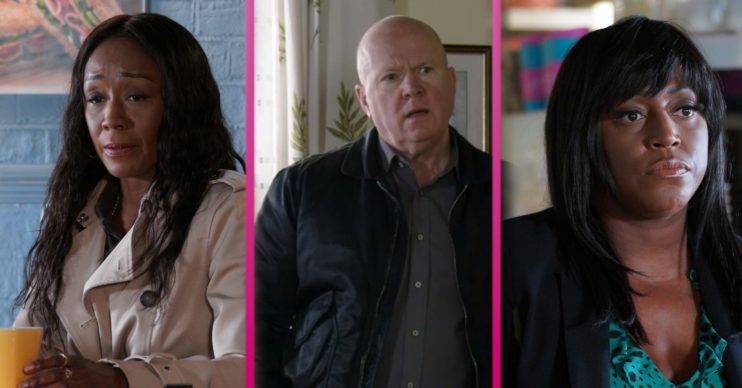 EastEnders spoilers reveal Denise tells Ellie who Phil is. Will she stop him from visiting Raymond?

In next week’s scenes Ben shares his concerns with Callum over Phil visiting Raymond. He’s particularly worried what will happen if Denise finds out.

But what they don’t realise is Lexi has overheard the conversation.

Later, Lola is complaining to Jay about Denise’s bad mood at work but they are stunned when Lexi tells them about Raymond.

While Phil visits Raymond and Ellis in hospital, Lola questions Ben about Phil’s relationship to Raymond. However Ben gives Lola his view before telling her to stay out of it.

Ignoring Ben, Lola feels torn and later tells Denise that Phil has been visiting Raymond behind her back.

Reeling from the revelation, Denise makes a call to Ellie…

Later Denise meets up with Ellie and tells her that Phil is Raymond’s biological father and that he’s bad news.

Denise soon confronts Phil to tell him she knows what he’s been doing.

Phil is furious at Lola for telling Denise that he has been seeing Raymond. Will Ellie stop Phil from seeing the little boy?

Raymond is Denise and Phil’s son from a one-night stand.

In 2017, after his birth, Denise made the decision to put her son up for adoption.

He was adopted by Jonah and Lydia Dawkins. However last month, Denise was devastated to learn the Dawkins family had been involved in a car crash.

Jonah, Lydia and Raymond’s sister all died as a result of the accident, however Raymond was left injured.

After hearing what happened, Denise decided to start visiting Raymond. But she told his grandmother, Ellie, that she is a family friend.

When Phil learnt about the crash, he also started visiting Raymond. What will happen next for the young boy?