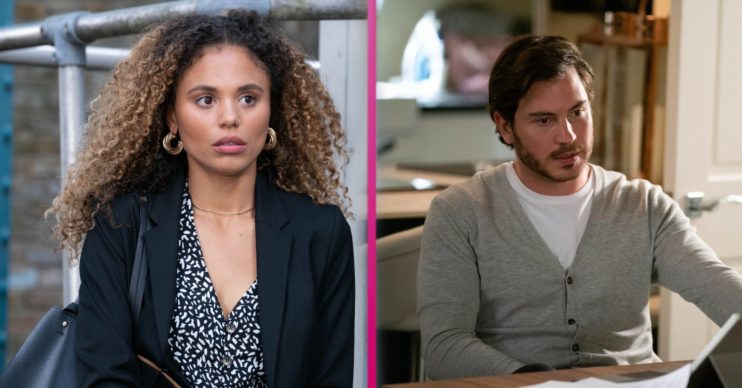 EastEnders SPOILERS: Chantelle plots to divorce Gray – but he finds out!

Gray has been abusing Chantelle for years

EastEnders spoilers reveal Chantelle is making attempts to divorce her abusive husband Gray. Will she be able to escape him?

Fans of the soap know Chantelle has been abused by Gray and it was revealed the show would be exploring domestic abuse in lockdown.

In next week’s episodes Chantelle has decided enough is enough and meets with one of Gray’s rival law firms to seek out the best divorce lawyer she can find. But she soon learns it’s going to be expensive.

Back at home, Gray continues to control his wife and installs a tracking app on to her phone before taking her credit card.

Chantelle later meets up with her boss Kheerat to ask if he can lend her money, unaware he has his own financial troubles.

Later Kheerat gives Chantelle as much money as he can. He pushes her asking what she needs it for and why Gray can’t help. Knowing she can’t hide it, she tells Kheerat it’s for a divorce.

He’s taken aback but promises to help her. The two of them share a moment, however Kheerat’s money troubles have just gone from bad to worse.

But later, Gray becomes suspicious when he spots a pop-up advert for divorce lawyers on his laptop.

As Gray leaves for work, Chantelle sets her plan in motion to get away with the children.

Will she be able to get away from her abusive husband?

Recently Toby-Alexander Smith, who plays Gray, appeared on EastEnders: Secrets From The Square with Jessica Plummer, who plays Chantelle.

Speaking to Stacey Dooley about Gray in lockdown, he said: “Gray’s been furloughed which is definitely a dent to his ego.

“So of course naturally that brings a trigger for Gray to get frustrated with Chantelle, therefore I imagine he’s probably pretty much at boiling point.”