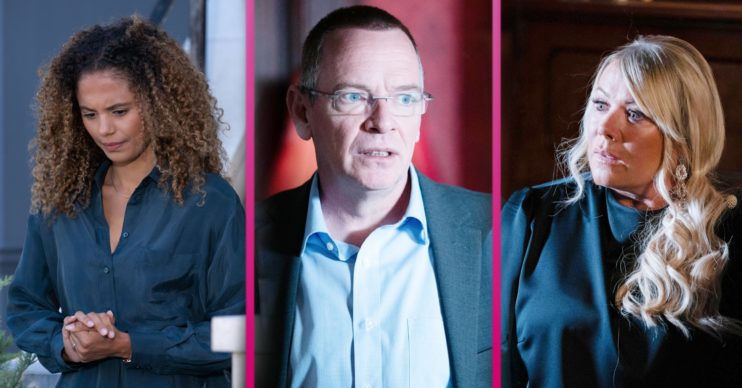 Back with a bang!

EastEnders spoilers for the soap’s return next week are explosive in a new autumn trailer.

The show has been off air for months as filming came to a halt due to the coronavirus pandemic.

However EastEnders will return Monday, September 7 and it looks like the show will be back with a bang.

Here are five spoilers from the EastEnders autumn trailer.

1. Chantelle in serious danger from Gray

It was revealed earlier this year that the soap would be exploring domestic abuse in lockdown.

In the trailer, Mitch can be seen telling his daughter Chantelle that he loves her.

But in her next clip when she returns home, her abusive husband Gray asks where she’s been, saying he has been trying to reach her for the last 20 minutes.

Further into the trailer he gets aggressive, going up to Chantelle telling her: “I am inside your head.”

At the end of the trailer, she can be seen in tears begging her husband.

It looks like things aren’t going to be smooth sailing for Max when the soap returns.

In a short clip in the trailer he can be seen in the Walford East kitchen yelling “enough” to an unseen character.

Read More: EastEnders’ Natalie Cassidy reveals she and June Brown were ‘naked in a hot tub together’

Before the break, viewers know he transferred his part of the business to Ian Beale to keep it protected from his soon-to-be ex-wife Rainie.

Could this argument have something to do with that? Or has Ian got himself embroiled in something else?

Viewers also got to see a glimpse of the return of Stacey Fowler.

In the clip, Ruby can be seen looking worried as she turns around to face her best friend.

Stacey then says to her: “Anyone would think you ain’t pleased to see me.”

We’re sure that will make for a dramatic reunion!

Before lockdown, Ben and Phil were in a warehouse robbery with Danny Hardcastle. Ben and Danny had beef when he realised he was setting Phil up.

In the new clip Ben tells Phil they need to ‘shut it down’ but Phil tells him to let it go.

But in another clip, Ben says ‘I really don’t want to lose you over this Callum’ as Callum looks worried at a computer screen.

Spoilers for next week reveal Callum goes through the warehouse CCTV footage and sees Ben on it.

With Callum now working with the police, is their relationship going to be in trouble?

At the beginning of the trailer, Ian tells his mum Kathy in The Vic that it’s a fresh start.

Upstairs in The Vic, Sharon tells Ian how grateful she is but things soon take a turn.

Later, Sharon looks upset as she says ‘what is all this?’, while Ian has a panicked look on his face.

It’s revealed in spoilers for the new episodes that Dotty tells Sharon that Ian is the reason Dennis died. But how will Sharon react?

Is it all over for Ian?