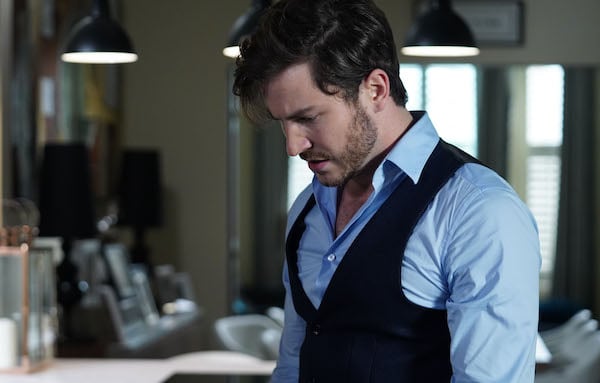 Gray has been abusing his wife Chantelle

It looks like the net is closing in on Walford resident Gray Atkins when the police come to his house to question him in tonight’s EastEnders.

In a preview shared on the official EastEnders Twitter account, the cops, including Albert Square’s Jack Branning go to question Gray about events from the night before.

Viewers know that Gray became angry with his pregnant wife Chantelle and stormed out of the house after having to stop himself punching her in the stomach.

The next day he returned home and told his wife that he spent the night on a sofa at his office, but it doesn’t seem like he was telling the truth.

As the police sit down to question Gray, they ask if he was at a nightclub in Farringdon.

Is Gray’s dark side about to become common knowledge?#EastEnders. Tonight. 8pm. pic.twitter.com/FgAzvjSM1Y

He tells them he was and Jack reveals to him that the police were called to the club in the early hours of the morning to investigate a fight that happened involving a guy named Connor Wheelan.

According to the club manager, the other man involved in the fight had gone by the time the police had arrived.

However, the “other man” dropped his bank card.

As Jack reveals it was Gray’s card and hands it back over to him, he asks what happened.

We will have to wait until tonight to find out what happened at the club.

Viewers already know that Gray has a violent side and abuses his wife, but others on the Square, including Chantelle’s family, have no idea.

Recently the solicitor said he was going to change and wanted to go to therapy, as the couple are expecting their third child together.

As he struggles to keep his temper in check, are Albert Square residents about to realise perfect Gray is actually very far from it?