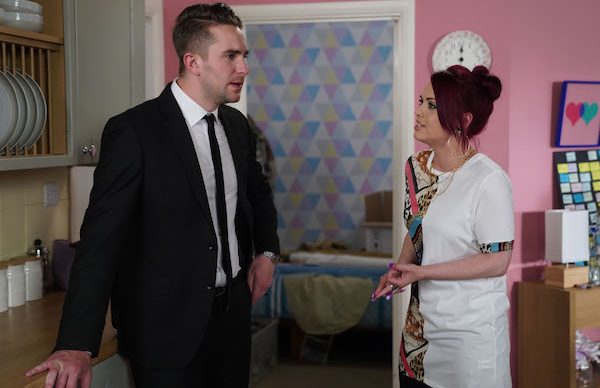 Has she worked out the truth about Ben?

There’s drama heading for EastEnders next week when Whitney Dean becomes convinced fiancé Callum Highway is cheating on her and demands to know the truth. Is their wedding about to be called off?

EastEnders fans know that Callum has shared secret kisses and nights of passion with Ben Mitchell, despite the fact he is set to marry fiancée Whitney later this year.

But Whitney is of course totally in the dark about the fact the man she is about to marry is actually bisexual and is forging ahead with plans to make their big day one they’ll never forget.

Next week sees Whitney suspicious that Callum is hiding something from her when she catches him sneaking around. But it seems she has put two and two together and got five.

When a mysterious woman called Vicky arrives in Albert Square looking for Callum, she shares some heartbreaking news that her brother, Chris, who was an ex army colleague of Callum, has died.

Callum is left devastated by her shocking revelation and struggles to process the news… leaving him finding it impossible to focus on anything but the fact he has lost his beloved friend.

The following day he struggles at work and suddenly leaves, heading to Chris’s memorial. But once there he finds the whole thing overwhelming and rushes out.

Back on the Square he tries to gather his thoughts, but he is soon cornered by a confused Whitney, who is worried about the fact he has been keeping his distance from her.

Demanding to know what is going on, Whitney asks her husband-to-be if he is having an affair… and although she means with Vicky, she has no idea how close she has come to the truth about Ben!

Callum is quick to set her straight and tells her about his friend dying, leaving Whitney feeling guilty and promising to support him in his moment of need.

However, Callum can’t seem to get Chris off his mind and he heads back to the memorial to say a proper farewell to his friend.

But what has got Callum so upset about losing Chris? Could Chris have something to do with the reason Callum left the Army?

Do you think Whitney will ever find out the truth about Ben? Leave us a comment on our Facebook page @EntertainmentDailyFix and let us know what you think!