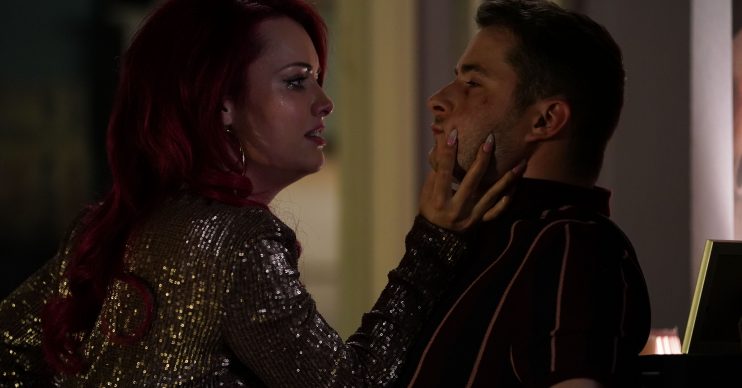 Whitney Dean has been left stunned by fiancé Callum Highway’s confession in EastEnders.

Determined to get answers from the one man who can give them to her, Whit head off to find Ben on Friday August 30.

After Callum took her away from her hen do to reveal he’d cheated on her with Ben Mitchell, Whitney is left distraught.

She wastes no time in heading round to find Ben and confront him.

Furious, hurt and all over the place, Whitney gives Ben some ugly home truths.

She ends with a chilling threat – but will Ben be afraid following her words? Something tells us it’ll take more than this to scare Ben Mitchell…

Next week sees Whitney preparing to go ahead with her big day regardless, but it’s clear she’s still concerned about what Callum has told her.

For his part, the groom-to-be tries his best to convince her he wants to marry her, but the doubts just won’t go away for Whit.

As she gets all dressed up in her pink bridal gown, it looks like Whitney will say I do, but the morning is further thrown into chaos by Sonia’s surprise for Whitney.

She’s organised for Bianca to be at the wedding, but with B nowhere to be seen, Whit’s cross she’s causing trouble already.

Whitney sets off to find her stepmum, leaving Callum worried that means the wedding won’t go ahead.

He steps up and helps Whitney and Bianca reunite, but as they arrive at the venue ready for the ceremony, Whitney is thrown when she sees Ben there.

She struggles to keep calm and the pair have another confrontation – but will Whitney wed Callum?

And what does the future hold for him and Ben? Is their past truly in the past – or do they have the sort of feelings that can never really be put to bed?