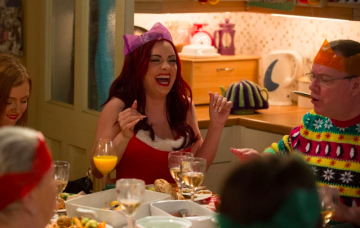 What will Halfway's reaction be to the news he's going to be a dad?

Whitney Carter is in for a shock over Christmas when she discovers she is pregnant.

The barmaid has been casually dating Halfway while living at the Slaters’ house with their entire family and her step-sister Tiffany Butcher.

But she’s going to have a drop back down to earth when she feels a little bit like she is with child over the festive season.

Scenes set to air over the Christmas and New Year will see Whitney realise she could be pregnant.

She will confide in soldier boyfriend Halfway over her discovery but she will be taken aback by his reaction to the news.

Halfway’s reaction is a closely guarded secret for the soap but it has been hinted that the couple are in for a future very much together.

Actor Tony Clay told Digital Spy: “They are a strong unit and a strong team.

“They’ve found each other now and they are working together to get each other ready for whatever is to come.

However, while Whitney being pregnant might be great news for her and Halfway, it probably won’t go down well with the Slaters and their increasingly packed house.

It was revealed earlier this week that a huge number of people are living in the terraced house they rent.

With the return of Alfie Moon and he and Kat Slater’s three boys, the house was stuffed with four more guests who all live in the four-bed house.

There’s Stacey Fowler with husband Martin and their children Lily, Arthur and Hope.

Stacey’s mother Jean also lives in the house alongside Big Mo, Kat, Hayley Slater and her own daughter.

And with Alfie and the three boys joining the likes of Whitney and Tiffany, the house is fit for bursting.

But surely there’s room for a little one?

What do you think of Whitney getting pregnant? Leave us a comment on our Facebook page @EntertainmentDailyFix and let us know what you think!