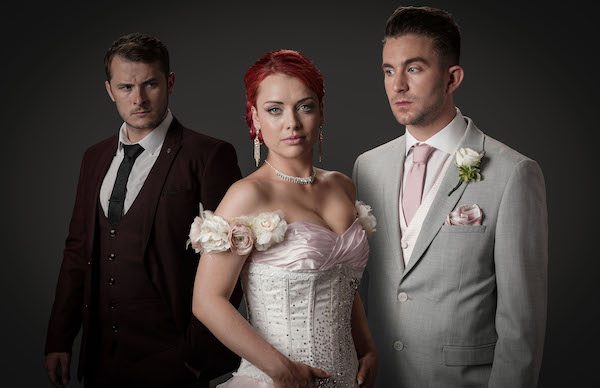 Is it all over for Whitney and Callum?

The EastEnders wedding that everyone has been waiting for is finally here, but with the truth that Callum Highway had a fling with Ben Mitchell now out, will Whitney Dean go through with saying ‘I do’?

Bride Whitney has been planning her dream wedding to Callum for months, but while she has been picking a wedding dresse and sorting table plans, Callum has been wrestling with the fact he is secretly gay.

Until now Whitney has had no idea that Callum fell in love with his army colleague Chris, or that he has had a full-blown affair with local troublemaker Ben.

But when Callum confesses to Whitney that he had a fling with Ben, he still didn’t tell her the whole truth… but is his bombshell enough to make Whitney call off the wedding?

As tensions between Whitney and Callum rise on the morning of their wedding, Whitney struggles to put what’s happened behind her and look forward.

Meanwhile Callum does his best to persuade Whitney that she is the one he loves and that he is desperate for them to get married… but it seems it could all be too little too late for the troubled bride.

To make matters more complicated, Sonia’s wedding surprise is that she has brought Bianca back to Walford to come to the ceremony, but in usual Bianca style she is nowhere to be found.

Tiffany accidentally lets slip to Whitney that Bianca is coming to the wedding and they set off to find her.

But while Whitney is determined that she won’t be getting married without Bianca there, Callum is left wondering if they’ll ever make it down the aisle.

With Callum’s help they manage to locate Bianca in time for the wedding, but with everything now in place, Whitney is still torn over what to do.

As she arrives for the ceremony, it seems the future Mrs Highway has made up her mind to marry Callum, but when she sees Ben lurking in the crowd, she sees red and a confrontation is on the cards.

With the man that her soon-to-be husband cheated with now standing right in front of her, will Whitney decide to go through with the wedding anyway?

Or will Ben’s presence make her realise that she will never be the one Callum really wants?

Do you think Whitney and Callum should tie the knot? Leave us a comment on our Facebook page @EntertainmentDailyFix and let us know what you think!