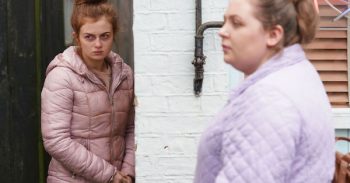 Tiffany's back in Walford and in more trouble than ever....

Tiffany Butcher is back in EastEnders next week, but her friends and family are stunned to realise she is in more trouble than ever before.

The last time we saw Tiffany she was heading off to make a fresh start with her mum Bianca in Milton Keynes… or so her guardian Whitney thought.

It actually turned out she was leaving the safety of her family and friends behind to go and live with evil Evie, who has been grooming her to become part of her drugs gang for months.

But next week sees Tiffany make a sneaky return to Walford… but she isn’t back to see her loved ones. Instead she is back to get her hands on some cash to help Evie.

As she creeps into Ted’s old flat to find a hidden stash of cash that had been hidden there by Evie, it doesn’t take long for her best friend Bernadette to work out she’s there.

But when Bernie takes Tiffany outside, she is shocked when Tiffany spots someone she doesn’t want to see and hides down an alley.

Little does Bernie know Tiffany has seen the man who previously beat up Evie, and soon she gets the terrifying truth out of Tiffany about what has been happening to her in the last few weeks.

Seeing the danger that her friend is in, Bernie is desperate for Tiffany to get some help but she just runs back to Evie with the cash.

Realising that things have got seriously out of hand for Tiffany, Bernie bites the bullet and tells her mum everything, leading to Karen telling Whitney and Sonia what has happened to Tiffany…

As Bernie reveals the true extent of what Tiffany is going through, she promises to lure her friend back to Walford so that everyone can help.

But when Tiffany gets to the Taylors’, she realises it is a set up and bolts.

Worried about what might happen next, Whitney and Sonia are desperate to get through to Tiffany… but all the scared teenager can tell them is that she needs to get her hands on some cash, and fast.

Not wanting her to leave again, Sonia lies and tells Tiff that she will find her the money she needs if she will stay the night.

Worried, Sonia asks Jack for advice on what to do with Tiffany, pretending that she is asking for a friend, and not revealing that she is actually talking about someone he knows.

But later her kind gesture is thrown back in her face when Tiffany starts stealing money from Sonia and even tries to get her hands on Dot’s beloved jewellery collection.

Furious, Sonia has a few choice words for Tiffany, but she is soon shocked when she lashes out at her. Desperate to help, Sonia locks Tiff in a room while she goes to get Jack for more advice… but is holding her captive going to help?

Apparently not, because when Sonia and Jack return, they’re horrified to see that Tiffany has escaped and they quiz Bernie about where she might have gone.

Remembering Ted’s flat, Bernie leads them there and they finally track terrified Tiffany down… but despite knowing that Tiffany is in a dark place, the trio are horrified by what they find.

What has happened to Tiffany now? And what did she so desperately need that cash for?

What do you think has happened to Tiffany? Leave us a comment on our Facebook page @EntertainmentDailyFix and let us know what you think!