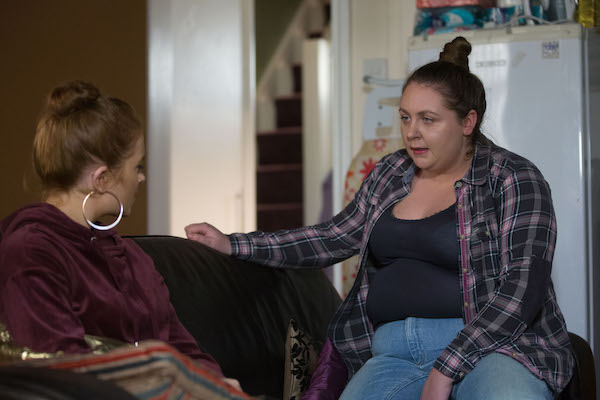 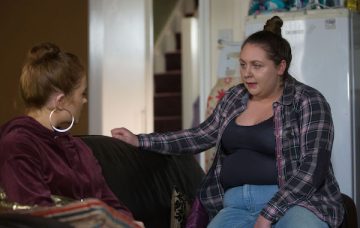 Evie gets between the friends once again

Tiffany’s bizarre friendship with evil Evie continues to come between Bernadette and Tiff again next week when Bernie drops a huge bombshell on her best friend.

The pair have been fighting ever since Tiffany got involved with Jagger and his drug-dealing mates, with her now well and truly under Evie’s thumb.

Terrified of what might happen if she doesn’t do as Evie says, Tiffany is between a rock and a hard place as Bernie begs her to go to the police.

Knowing that Bernadette has feelings for her friend, Evie has been playing the pair off on one another, even getting flirty with Tiffany to make Bernie jealous.

But next week sees Tiffany once again trying to impress Evie, and it seems to be going well until she is given a huge job – find someone else to work for the gang.

But of course, it’s a mission impossible, because who would want to work for Evie and her mates?

Panicked, Tiff rushes home and takes her worries out on her nearest and dearest… and after she snaps at Stacey for no reason, the Slaters are left wondering what is going on with the teenager.

But before they can work out what Tiffany’s problem is, she is back at Bernadette’s and the pair have an almighty row as Bernie drops a bombshell on her best friend about a run in she had with Evie…

Tiff is fuming with Bernie for getting involved and making things even worse with the gang, and says some hurtful things that leave Bernie utterly heartbroken.

But while Tiff might feel bad about what she has said, she doesn’t have time to apologise because Evie is on the prowl again, stirring up more trouble.

After the gang leader is left humiliated following a run-in with Phil and Dennis in the cafe, Evie tells Tiffany exactly who she wants as her newest recruit… as revenge for the way Phil spoke to her, she wants Dennis to come and work for her.

Read more: EastEnders make joke about their own ‘back from the dead’ plots

Tiffany is horrified about the mess she has got herself in to and starts to feel the pressure from Evie.

But will she really go as far as recruiting Phil Mitchell’s step son into the drug-dealing gang just to keep Evie happy?

And while she is panicking about doing Evie’s dirty work, what about her relationship with Bernie?

Has Evie’s involvement finished their friendship off for good this time?

What do you think of newcomer Evie? Leave us a comment on our Facebook page @EntertainmentDailyFix and let us know what you think!