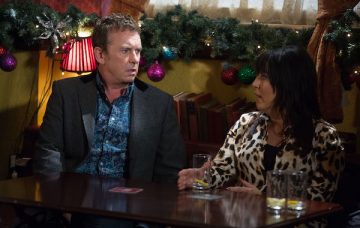 Despite each and every one of the Slaters wanting to make this the perfect Christmas, the reality couldn’t be more different as the ticking time bomb about Alfie being Hayley’s baby daddy sits quietly, just waiting to explode…

Poor Jean is a woman on the edge on Christmas Eve as she struggles to keep the fact Alfie is baby Cherry’s dad under wraps.

And with Stacey becoming increasingly more concerned about her mum’s erratic behaviour Hayley is forced to step in and cover before Jean blurts out the truth.

As Stacey questions Jean, Hayley jumps in and announces that Jean and Ian are a couple, deflecting Stacey’s focus away from her.

But while her plan might work temporarily, nothing can prepare the Slaters for what is to come on Christmas Day.

The big day gets off to a great start for the family as Alfie goes all out to make it a day they will remember… but little does he know it certainly will be a day they’ll never forget, just for all the wrong reasons.

Alfie is thrilled that Kat has finally got her wedding ring back on, and while Kat might not be convinced that it is the right thing to do (little does she know!) Alfie can’t help but see it as a sign that things are looking up for their marriage.

But just when he thinks Christmas Day can’t get any better, he is left stunned when a huge revelation turns his world upside down. But what has happened that can turn things on their head so dramatically?

During the commotion, Hayley’s mum Bev – who is also there for the day – outstays her welcome as she starts being rude to Hayley. Kat is forced to step in and defend the new mum, throwing Bev out on her ear.

But while Hayley is grateful, her and Alfie struggle with the weight of their lies and eventually Alfie is the one who reveals he’s got no option but to leave Walford again.

Hayley manages to stop Alfie and the pair come up with a plan, but before they can put their plan into motion, they’re stopped in their tracks when a dramatic chain of events lead to the shocking truth about their one-night stand being revealed.

Kat and the rest of the Slaters – apart from Jean who already knew, of course – are speechless as the truth begins to dawn on them… Alfie is the father of Hayley’s baby.

As Kat’s world implodes – total chaos hits the Slaters house, leading to consequences that no one could have predicted. But what happens on Christmas Day that will leave the who family’s world turned upside down forever?

By Boxing Day the Slaters are still struggling to come to terms with what happened, and it isn’t long before tensions reach boiling point once again as people fail to keep their emotions in check.

As carnage continues, there is yet another terrifying twist set to come as events take an unexpected turn… but where will the reveal leave the Slaters in the days and weeks to come?

The latest EastEnders Christmas trailer has hinted that Alfie could be left for dead after a fight with Kat… but will she be left with blood on her hands?

EastEnders will air these scenes on Monday 24th, Tuesday 25th and Wednesday 26th December on BBC One.

Do you think that Kat would ever forgive Alfie for his betrayal? Leave us a comment on our Facebook page @EntertainmentDailyFix