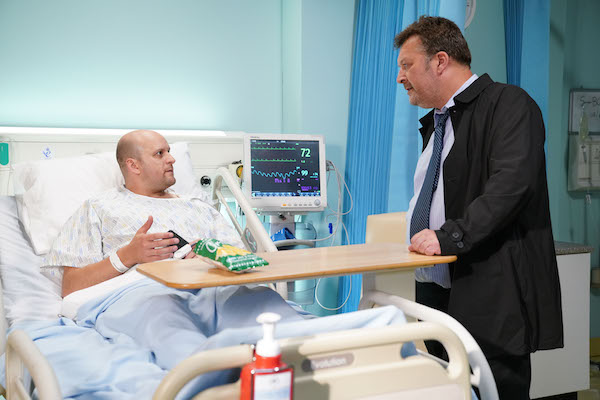 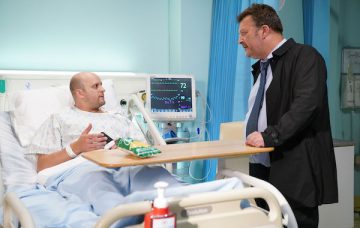 EastEnders fans were outraged this week, when Stuart Highway put his powers of manipulation to work yet again in an attempt to bring down Mick Carter.

On Tuesday, Stuart told police that his former friend Mick had shot him… Within minutes, a devastated Mick was arrested and led away to a police cell.

Although even his own brother Halfway believes he shot himself to exact revenge on the Carters, Stuart still has one last person on his side…

But for how long?

Stuart’s daughter Zara is currently keeping her dad company while he recovers in hospital.

While at first, viewers weren’t sure of her motives, she gained an army of enemies last night (Thursday 20 September) when she provided a false alibi for her dad.

After questioning him about Halfway’s theory that he’d shot himself, Stuart promised her he was the victim and that Mick had tried to kill him.

Although she witnessed him lie to the detectives, and even saw him stab himself with a fork in order to get out of police questioning, she chose to believe her dad.

When Linda stormed into the hospital to confront Stuart, Zara warned her: “You need to leave him alone!”

Linda begged: “He’s made it all up. Zara, you can’t let him manipulate you. That’s what he does. I’ve got a little boy at home, Ollie. He’s only three. And he keeps asking me when his daddy is coming home.

“I will not let my husband go down for something he didn’t do.”

However, this only served to make Zara angry as she snapped back: “Oh what, like my dad did?”

Viewers know that Stuart did time for Mick when they were younger. But the reason is yet unknown.

Choosing to defend her dad, Zara then told DI Peter Arthurs that Stuart was with HER the night of the shooting.

But will Zara continue to ignore her own suspicions, or do the right thing?

No sympathy for the devil. #EastEnders pic.twitter.com/JR1MTtoYQP

Upcoming episodes show Linda continue to convince Zara that her dad is lying.

Meanwhile, Mick struggles in prison as one of the inmates decides to start a campaign of terror against him.

Naturally, Stuart is happy as a toddler in a sweet shop when he hears about the ongoing suffering of his former best friend.

When he is discharged from hospital, however, Zara notices that her dad seems a bit TOO happy with how things have worked out – and accuses him of having a vendetta against the Carter family.

When Stuart once again targets the Carters by turning up at The Queen Vic, Zara realises she has a difficult decision on her hands.

Stick by her dad, or let an innocent man get punished in jail?

With Danny Dyer known to be leaving the soap in the foreseeable future, it’s anyone’s guess.

Do you have any sympathy for Zara Highway? Leave us a comment on our Facebook page @EntertainmentDailyFix and let us know what you think!