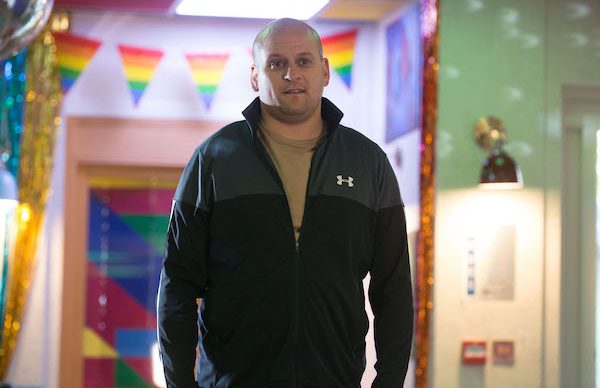 There’s drama heading for Callum Highway in next week’s EastEnders when Stuart Highway realises there’s something between his brother and Ben Mitchell.

Ever since Callum let slip that he was having trouble with someone, Stuart has been on a one-man mission to find out who has been bothering his little brother.

But while he’s had his suspicions that it is Ben who has been causing trouble, Stuart’s theory is confirmed next week when he catches Ben and Callum sharing a sneaky kiss.

At the start of the week Whitney is in full wedding preparation mode and asks Callum if he is going to invite his parents to their big day.

But when Callum is evasive about the whole thing, she realises that it is a sensitive subject and drops it.

It’s only when Stuart urges Callum to think about asking their dad along that the undertaker agrees to give it some thought.

Eventually Callum reaches out to his dad… but while he is building bridges, Whitney has got her own drama going on.

As she opens her market stall at last, the budding designer finds herself getting roped in to making Pride celebration t-shirts for Tina’s event at The Prince Albert.

While Callum and Stuart prepare to meet their dad at the restaurant, Callum is a bundle of nerves – however it seems he didn’t need to worry because Jonno immediately hits it off with Whitney.

As things go well, Callum decides to invite his dad to the wedding, but Jonno soon starts to show his true colours when he teases Callum about his latest career choice.

But Ben’s feelings are the least of Callum’s worries when he is roped into wearing Whitney’s new gay pride t-shirts and couldn’t feel more self-conscious if he tried.

But Callum’s day gets worse when he goes for a drink with his dad in the pub, only for Ben to arrive and antagonise Jonno about his words the previous day.

But Jonno clearly doesn’t like whatever Ben has to say because before long he’s storming out of the pub with Callum in tow.

Callum and Ben later have a heart-to-heart about what happened and as the pair open up about their pasts, they end up sharing a sneaky kiss…

However, what they don’t realise is that Stuart has seen the whole thing!

As Pride gets underway, Walford is awash with colour and fun – but Callum gets more than he bargained for when he is roped into working behind the bar at The Prince Albert.

How will Stuart react to the news his brother is having a secret fling with a man?

And with the truth out, does this mean Whitney is about to find out that her fiancé is cheating on her with Ben?

Do you think Stuart will tell Whitney about Callum’s secret? Leave us a comment on our Facebook page @EntertainmentDailyFix and let us know what you think!