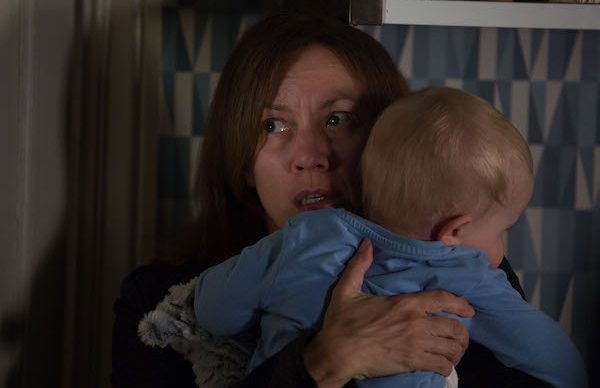 There's drama when Rainie comes back to the Square...

There’s drama in EastEnders when Stuart Highway distracts Max Branning so that estranged wife Rainie can return to Albert Square in secret next week.

Max and Jack were left fuming when they discovered not only had Rainie fled the Square with their life savings, but that she had also taken little Abi Branning with her.

Max’s behaviour ever since he returned from France has been winding Rainie up, but seeing him kissing Mel Owen was the last straw and she decided to leave Walford and take baby Abi with her.

But instead of calling the police and getting them to find her, Max has begged Jack to keep the police out of it, convinced that if he gets in authorities involved then he will lose his granddaughter for good.

However, after a short time away from the Square, Rainie makes a return next week… but she isn’t planning on staying for long.

With Ian Beale also on board, Max makes it his mission to try and find his estranged wife. But while their search is fruitless, they are shocked when they get a message from her asking to meet at Joanna’s cafe the following day.

The pair are thrilled at the thought of seeing little Abi again and Max suggests they leave Jack at home, thinking he will cause trouble and want to involve the police.

So Ian and Max head to the cafe that Rainie suggested, but when they get there they’re shocked to find Stuart is meeting them and not Rainie.

With Max distracted, Rainie gets into the Brannings, desperate to get Abi’s favourite toy that she accidentally left behind. But just when she finds it, Jack catches her red handed.

Desperate to leave Walford again, Rainie is forced to go to unthinkable lengths to get away from Jack – but what will she do to him?

At the cafe, Stuart is busy reassuring Max and Ian that Rainie has simply gone on holiday and will be back soon… but with what is unfolding back at the Brannings, it doesn’t look like Rainie will be coming back again any time soon after what has just happened.

Could this be the last we see of Rainie and Abi? Or is this just the start of a whole new plot twist?

Do you think Stuart and Rainie make a good team? Leave us a comment on our Facebook page @EntertainmentDailyFix and let us know what you think!