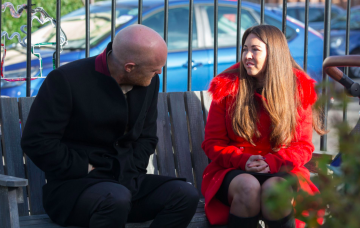 EastEnders SPOILER: Stacey and Max to sleep together AGAIN?

The pair keep being brought back together by circumstance

The gruesome twosome slept together last year after Max was kicked out of his house when his revenge scheme against Walford was discovered.

But since then things have moved rapidly on.

Max’s pregnant daughter Abi was killed trying to stop him from killing himself, and his daughter Lauren fled Walford for a new life in New Zealand with ex Peter Beale.

Abi’s baby, named Abi in her memory, has been the subject of a long-running storyline that has seen Max take drastic steps to win custody of her.

He engineered a fake marriage with recovering crack addict Rainie Cross to try to convince Social Services that he’s the perfect parent to bring up his granddaughter.

But now that seems to have been settled, helpfully with Rainie blackmailing her own mother, it seems Max is about to get a wandering eye again.

And it’s going to see him staring straight at Stacey.

As Stacey’s concerns about her mum Jean’s behaviour intensify, she chooses not to confide in her husband Martin or one of the 23 Slaters living in their house, but instead Max.

Turning to her ex lover for support, Stacey realises it’s not just her who needs help.

With it a year since his daughters plunged off the Queen Vic roof to death and disablement, Stacey knows Max will be having a difficult time coping at Christmas.

So as well seeking her own support, she later checks in on him to see if he’s OK and sparks could be set to fly.

The pair share a touching moment, but with their complicated history, should Martin be worried about Stacey’s behaviour?

Do you think Max and Stacey belong together? Leave us a comment on our Facebook page @EntertainmentDailyFix and let us know what you think!