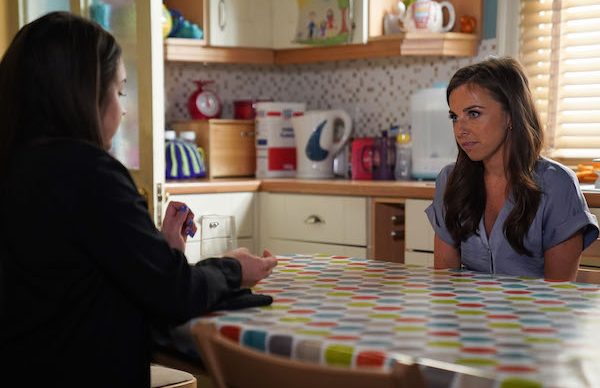 Is this the end of their friendship?

Stacey Fowler struggles to hide her jealousy in next week’s EastEnders when Max Branning and Ruby Allen get closer… but what about her husband, Martin?

Stacey and Ruby have been thick as thieves since Ruby’s return to Walford at the end of last year, but it looks like that’s all set to change next week when Max comes between the best friends.

The drama starts when Max hits rock bottom as he struggles with life without granddaughter Abi by his side.

Thankfully for Max, Stacey is there to help him pick up the pieces, and the pair find themselves spending more and more time together.

But while Martin isn’t happy about his wife spending time with Max, it soon seems he was right to worry when Stacey ends up spending the night at the Brannings.

But while it remains to be seen whether Stacey’s sleepover was innocent or not, she soon finds herself battling for Max’s attention when he flirts with her best friend, Ruby.

The pair start to see one another in a new light when Max helps a struggling Ruby with her work accounts, and the business chat soon turns into flirting.

But Stacey is jealous of the connection her ex flame and best mate seem to have, especially when she catches them together as she pops to the Brannings to deliver some dinner for Max.

Ruby is totally baffled by Stacey’s reaction to seeing her with Max, having no idea about the history the pair share.

Max eventually fills Ruby in on what has happened between him and Stacey in the past, and Ruby immediately feels awkward.

As she dashes away from Max, deciding that she needs to talk to Stacey. But will the pair find their friendship over as Max comes between them?

Or Will Ruby take a step back from Max now that she knows about his connection to Stacey?

Stacey is clearly jealous of Ruby and Max… but where does this leave her friendship with the pair? And what about poor Martin?

Do you think Ruby and Max make a good couple? Leave us a comment on our Facebook page @EntertainmentDailyFix and let us know what you think!