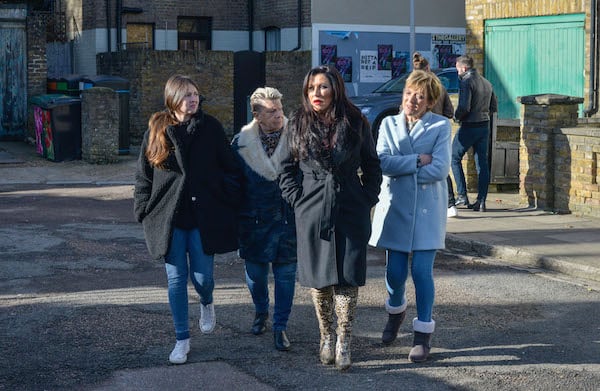 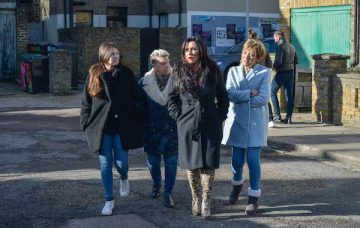 It’s only a matter of time before Hayley’s secret is revealed and it’s set to blow the Slater family apart.

The fact that Alfie Moon is Hayley’s baby daddy will rock Kat and Alfie’s relationship to the core – shattering fans hopes that they will one day reunite.

The revelation could also leave Hayley’s life in danger, as Kat will feel furious and hurt that she’s been betrayed by Hayley after taking her under the wing.

It could also spark a custody battle between Alfie and Hayley… Hayley would be the first to admit her role as a parent hasn’t started well.

Viewers know that Hayley gave birth to a baby girl last month, but has been desperate to keep her daughter’s paternity under wraps.

We don’t blame her!

Alfie – and soap fans – discovered that Hayley was pregnant with his baby back in May but believed she would have an abortion.

Something Hayley was desperate to do at first, regretting the result of the one night stand and believing she’d be an unfit mum.

However, Alfie is now on his way back permanently to Walford, and the truth will be exposed in explosive scenes due to air on Christmas Day.

The Sun has reported that some ‘classic’ Slater scenes will land over the festive season, as Kat and Alfie go head to head over his secret love child.

Speaking of the impending storyline, The Sun wrote: “The scenes will be classic Slaters. It will be a huge row and will be carnage.

“It will hark back to the days of Kat yelling at Zoe about being her mum all those years ago.”

The newspaper added: “Alfie is going to have a big headache, come Boxing Day, and it won’t be because of the Christmas wine.”

Rubbing our hands in glee… Who us?!

The sisters ended up falling from the great height, with Abi losing her life.

Something tells us this year’s Christmas storylines will also include the villainous Stuart Highway, while Ray and Mel’s marriage will also set off fireworks!

Which soap are you most looking forward to this Christmas? Leave us a comment on our Facebook page @EntertainmentDailyFix and let us know what you think!