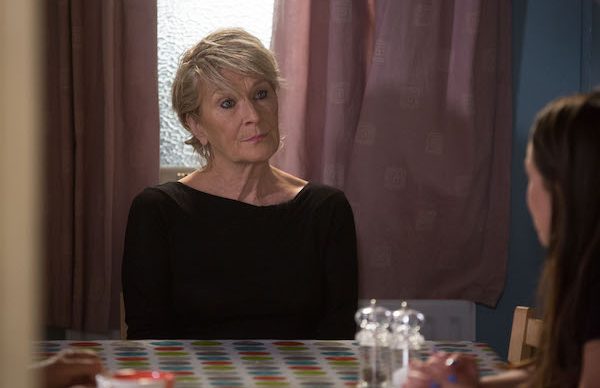 The Slater's have Phil's money and he wants it back

Shirley lays down the law with the Slaters in tonight’s EastEnders.

A couple of weeks ago Kat was mortified to realise the £50,000 that her husband Alfie stole from Phil Mitchell had been taken from under her mattress.

Although she accused Martin at first, it turned out Stacey had taken the money.

Ever since Stacey has been splashing the cash buying new phones and designer clothes and bags.

Phil instructed his former flame Shirley to get information about the money out of the Slaters for a small cut of the money.

Read More: EastEnders viewers horrified as Rainie agrees to sleep with a stranger for £30 in front of baby Abi

In a preview for tonight’s episode, posted on EastEnders’ official Twitter page, Shirley goes round to the Slaters saying she’s there for Phil’s cash and he knows they have it and wants it back.

Kat tries to lie and says Alfie took it and none of them have seen him in months but Shirley knows it’s not true.

Kat then says that Phil threatened her once trying to kidnap her son Tommy and that if she had it she would’ve given it back.

Shirley tells the Slaters she’s trying to help and money like that won’t do anyone any favours and begins quoting Jean: “Pinching a pound here and a penny there, kids arguing who’s got the most expensive gadget, it really is the root of all evil.”

As she says this, she gives a steely look to Jean , who realises she’s betrayed her.

She tells them if they give the money back by 6 o’clock that evening then there won’t be any payback.