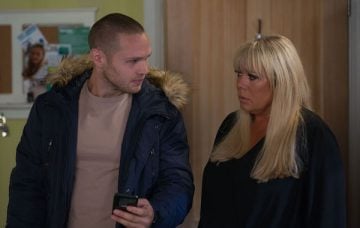 Keanu thinks he knows who's onto them....

Keanu Taylor works out who is blackmailing him over his affair with Sharon Mitchell next week.

It comes after Jay Brown pulls his mate up on his odd behaviour over the past few weeks.

Read more: First look at next week’s EastEnders in 10 pics

As Jay and Keanu talk, Keanu comes to a worrying realisation over who the blackmailer could be.

Keanu is determined to find out the truth about the blackmailer once and for all and sets them up to confirm his suspicions.

When they are indeed confirmed, Keanu heads off to tell Sharon.

So who is the blackmailer?

Keanu and Sharon probably need to be a bit more careful as they’re also caught by Keanu’s mum Karen next week.

The launderette worker gets the fright of her life when she spots Keanu and Sharon locking lips in the alleyway by the Vic.

Later she pulls her son up on what she saw and is horrified when Keanu admits that he has been having an affair with Sharon and that someone knows about it.

Terrified for Keanu’s safety, she angrily confronts Sharon and begs her to stop seeing Keanu before Phil finds out and kills him.

Sharon makes a decision but will she be able to stick to it?

Danny Walters who plays love struck Keanu revealed that when the affair comes out, it will be like history repeating itself for Sharon.

He revealed to the Radio Times that the pair would be caught out, and it might bring back some memories for long-term fans.

“The way I’ve played Keanu is that this is genuine love. If it’s not, it all becomes about mind games and strategies – and that’s not really Keanu’s style.”

We can’t see this having a happy ending for Keanu though.