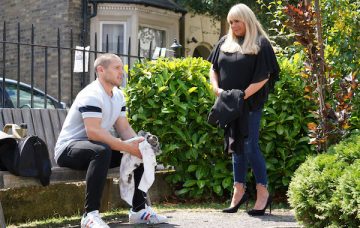 The age gap romance looks like it's already over

Sharon Mitchell has a freak out moment in EastEnder next week when she suddenly feels her age around toyboy lover Keanu Taylor – and chucks him.

Early in the week the pair are more besotted than ever, but when Keanu’s sister Bernadette catches him taking saucy pics to send Sharon, Keanu is humiliated.

His humiliation gets even deeper when he discovers he’s not actually old enough to get a licence as a minicab driver which has been his job plan since Phil fired him from the Arches.

Sharon is left dumbstruck when she realises how big the age gap actually is and while she and Keanu are in the car together it becomes to much so she makes her excuses and leaves.

Keanu is stunned and confronts Sharon, forcing her to admit she feels she’s too old for him.

She also tells him that Phil would literally KILL him if he ever found out about them.

Keanu is gutted and storms off, leaving a smitten Sharon heartbroken.

Later in the week things are awkward when they bump into each other when Keanu is on his way to a job interview.

After everything that’s happened Keanu tells her he’ll drop the keys to Phil’s car –  which he hoped to use as a minicab – round later.

But Sharon is then left panicked when she hears there’s been a huge car accident in the same area as Keanu’s interview.

She gets hold of his mum Karen, who hasn’t heard from him either.

Is Keanu ok? Or will Sharon lose him before getting a chance to tell him how she really feels?

Is it all over for Sheanu? Leave us a comment on our Facebook page @EntertainmentDailyFix and let us know what you think!