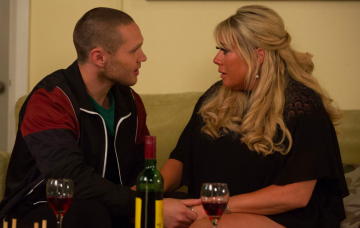 Could their affair really have been rumbled already?

Keanu Taylor and Sharon Mitchell fear their steamy affair has been rumbled after they think someone sees them kissing in the Arches.

After telling her what he saw at the canal the previous week, Sharon realises that Keanu is taking it very seriously.

Keanu’s set on doing the right thing and Sharon shares some harsh words with him before storming off.

Later at the Arches, the pair try to ignore what’s happened and they kiss.

But they’re startled when they hear a door slam – someone was watching them, but who?

After that they decide to keep a low profile while they try to work out who could have sprung them.

But is it too late? Could their secret already be out?

It’s the second close call for the couple who were almost caught by Sharon’s stepdaughter Louise Mitchell last week.

The Mitchell matriarch finally sealed weeks of flirting and lascivious looks with a passionate kiss with Keanu Taylor.

And with their affair just beginning things could be about to take a disastrous twist.

Next week Sharon is going to jump headfirst into the lake known as adultery and start romping with Keanu at every available opportunity.

With Phil gone, Sharon still has to work around her son Denny and step-daughter Louise, but once they’re out of the house, she’s free and easy.

But unfortunately for her, getting teenager Louise out of the house is seriously difficult.

And keeping her out is even harder as she will discover next week when Louise walks in on Sharon preparing to put the moves on her toyboy lover.

The pair are thrown apart by Louise’s arrival, and fortunately she seems to be more concerned about her phone that her step-mother’s obvious affair.

But how long can she keep her passions hidden?

Last week viewers were left overjoyed as Sharon and Keanu finally got it on.

With her husband Phil is out of the country Sharon decided to seduce Keanu with a text message.

Who do you think catches them? Leave us a comment on our Facebook page @EntertainmentDailyFix and let us know what you think!