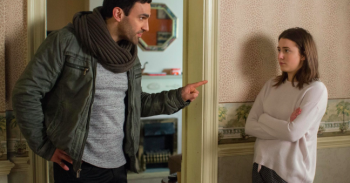 She dated his dead brother and he has a baby with her step-mother, complicated doesn't quite cover it

EastEnders is lining up a shock new romance for Kush Kazemi – one that could get him well and truly battered.

Loveless Kush has only just split up from Denise Fox, but there’s a new potential romance for him that could make things very awkward.

In last night’s episode Kush was caught half-naked with a mystery woman by Martin Fowler, only viewers know it was Big Mo who has been staying at his house.

And while Martin spent most of the episode winding Kush up about his mystery fling, Kush became very determined to put the rumours to bed when Bex Fowler was around.

“No, stop spreading rumours,” he said to Martin and Bex looked on wistfully.

Kush even stepped in when he spotted Bex talking to evil Stuart Highway, with Bex telling her dad how Kush was ‘defending her honour’.

The potential new love match then left Martin looking after Kush’s stall to get a coffee together.

Amid all the flirting over the coffee, the pair’s chemistry came through but then it all went weird when Kush mentioned his dead brother, her ex-boyfriend Shakil.

“Shaki would have wanted for me to keep an eye on you,” he told her.

But something tells us this wasn’t what poor murdered Shakil had in mind.

Viewers already know how Kush is the biological father of Martin’s step-son Arthur after a fling with his wife Stacey.

So if he got together with Bex, then Martin’s wife and daughter would both have slept with him, and with Martin’s temper being on the short side, it could spell disaster.

At the very least there would be a punch up – at least that’s what fans think.

One said: “Uhm, Bex and Kush totally came out of nowhere and I am so ready for all the drama #EastEnders”

Read more: EastEnders looking to hire a mega-fan who binge watches the soaps to come up with plots

A second said: “OMG! Bex and Kush are totally going to hookup #eastenders”

Another added: “Bex and Kush, calling it now. Ready for the drama. #eastenders”

Do you think Bex and Kush make a good couple? Leave us a comment on our Facebook page @EntertainmentDailyFix and let us know what you think!