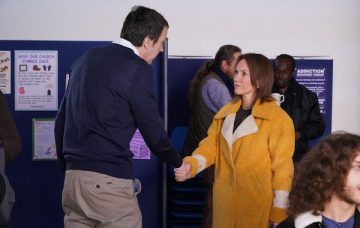 And there's a familiar face in the group

Rainie Branning is set to hit rock bottom this week as she struggles to cope without husband Max Branning around.

After Max and Jack fled Walford for a break in France after the drama with Mel Owen, Rainie has been left home alone looking after the family businesses.

But without Max by her side, Rainie is struggling, and heads to the Vic to drown her sorrows. But while she is there, she meets the mysterious Lewis…

After having a few drinks too many, Rainie wakes the next morning and is horrified about her night with Lewis, and throws away all the alcohol in the house.

But she is clearly not coping on her own and decides she needs some support while Max is in France.

Rainie attends a Narcotics Anonymous meeting so that she has someone to talk to, but nothing can prepare her for who she spots when she arrives.

As Rainie introduces herself to the group leader, she’s shocked when she sees none other than Stuart Highway also attending the group.

Keeping out of Stuart’s view as he talks to the group about Dot, Rainie gets a real insight into Stuart’s dark past, and he has absolutely no idea that she’s there listening.

When Rainie sees Stuart in the Vic with Dot the following day, she can’t resist taunting him about what he revealed in the meeting.

He’s furious that she knows his darkest secrets, until she reveals she was also at the meeting and that’s how she knows.

Realising that Rainie could understand his past, Stuart opens up to her and confesses everything. But what has he been hiding from everyone all this time?

Paranoid that Rainie could spill his secrets at any time, Stuart decides to pack his bags and leave the Square. But will he actually go?

Meanwhile Rainie has her own demons too deal with… but was cheating on Max a one off, or is this going to become something of a habit as she starts to spiral out of control in his absence?

Do you think Rainie will regret taking on sinister Stuart? Leave us a comment on our Facebook page @EntertainmentDailyFix and let us know what you think!