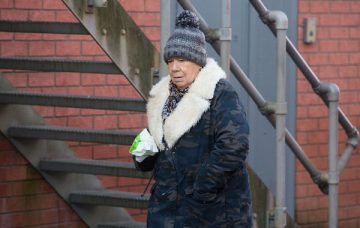 Things are looking bleak for the Slaters

While the rest of the Slaters are desperately trying to track down missing Jean, Mo has got her mind on other things.

Terrified that something awful has happened to her mum, Stacey comes up with a plan to make the police up their search for Jean.

But despite the fact that time is running out for poor Jean, who is struggling to cope with her cancer scare, Mo has only got one thing on her mind… making some quick cash.

No change there, then!

As Kush Kazemi makes the decision that he needs some new stock on his stall, he thinks about roping Mo into going halves with him, hoping their deal could benefit them both.

Knowing that Mo is a woman in the know when it comes to getting cheap knockoffs, Kush asks the Slater matriarch if she wants to strike a deal, but he is in for a shock when she comes up with another plan.

‘Borrowing’ the cash that Kat was left by Alfie, Mo decides to double cross Kush by getting her own stock and trying to sell it illegally on the market.

But when Kuch catches her, he is understandably fuming… and things quickly get out of hand as they argue.

It doesn’t take long for Kat and Stacey to find out what Mo has been up to, and they’re fuming to discover that Kat’s money has gone missing.

Only a few weeks ago Kat was fuming when Mo offered to help her by taking little Tommy to school, only to use him to make some cash before losing him in the Square.

Fed up with her scheming and lies when they’ve got much more important things to be concentrating on, the pair have had enough and a livid Stacey throws Mo out of the house.

But with her family turning against her and everyone annoyed with her dodgy market dealings, where will she go?

Do you think Mo deserves to be thrown out? Leave us a comment on our Facebook page @EntertainmentDailyFix and let us know what you think!