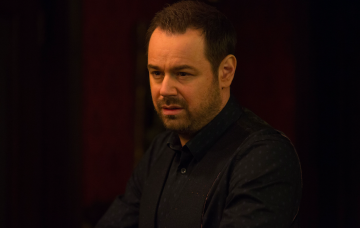 But he's only got one thing on his mind

Mick Carter is finally a free man again next week – but despite being reunited with his beloved wife Linda, it doesn’t look like the Carters are going to have a very merry Christmas…

The start of next week sees Mick back in Albert Square, and while his friends and family are thrilled that he is home, it is clear that his time in prison has changed the pub landlord.

EastEnders fans will know that Mick has spent the last few months in jail after being framed for shooting Stuart Highway.

It has since been revealed that twisted Stuart is the one who got his ‘frenemy’ sent down by shooting himself and claiming Mick was responsible… but thankfully Mick’s family have stood by him as he protested his innocence.

Over the last few weeks Linda has been battling her conscience as she pretended to side with Stuart, making friends with the the man who landed her husband in jail.

She even went as far as seducing Mr Highway… but thankfully it was all part of a master plan to get him to confess.

Next week the truth about what really happened that fateful night back in September is revealed, but while everyone celebrates having Mr Carter back, it is clear he is still being haunted by everything that evil Stuart has put him through.

By Friday December 21 Mick is still struggling to get back to some sort of normality after his stint in jail, and it is clear that spending time at Her Majesty’s pleasure has had a serious affect on him.

With him being home with Linda for Christmas you would have thought all Mick’s prayers had been answered but, despite having everything he’s spent the last two months dreaming of, there’s still something bugging Mick.

Struggling to concentrate on his family life, Mick only has one thing on his mind – revenge.

But how far will he go to get his own back on the man who has spent the last few weeks trying to fill his shoes?

Will Mick be left with blood on his hands this Christmas?

Do you think Stuart will die this Christmas? Leave us a comment on our Facebook page @EntertainmentDailyFix and let us know what you think!