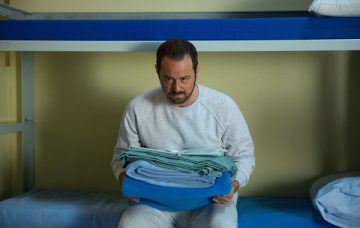 He clashes with other inmates as his prison nightmare begins

Poor Mick Carter gets off to a really bad start in prison next week when he clashes with a scary inmate called Fraser.

It all starts when a desperate Mick wants to wish son Johnny a happy birthday and starts asking around about getting his hands on a burner phone.

He’s told he needs to speak to this Fraser guy who tells Mick he needs a favour and, with little choice, Mick does as he’s told.

But when Mick realises the ramifications of his actions, he’s left horrified. What happens?

When Mick seeks out Fraser to ask for the phone he’s shocked by what he learns and is left fearing for his life.

Mick tries hard to sort things out with Fraser but then has an altercation with another inmate in the canteen and realises it won’t be that easy after all.

Mick’s cellmate Bob tells him to lay low but soon Fraser is hunting Mick out, telling him he needs another favour.

He ends up having a visit with a mysterious woman and is left worried about what’s in store for him as Fraser gives him a dangerous ultimatum.

Later, Mick tells a horrified Linda about the woman who came to visit him and he’s left even more worried when Fraser gives him a threat he can’t ignore.

Back on the Square, Linda is determined to get Mick out of prison and enlists Halfway’s help to try to speak to Stuart’s daughter, Zara.

They desperately try to convince her that her dad’s lying but will she be convinced?

It actually looks like their interference does more harm than good as Zara heads to visit Mick in the nick and gives him some home truths.

She tells him she’s standing by her dad and advises Mick to tell the truth for the sake of Ollie.

With Danny Dyer taking a break from filming next year while he appears in a new theatre role, it looks like Mick’s imminent trip to jail could become more long-term as the character is written out of the show.

Last night’s visit to Walford saw yet another twist in the ‘who shot Stuart’ saga as the villain woke from his coma.

Tonight’s trip to the square will see Mick arrested for trying to murder his ‘frememy’ in cold blood. But have they got the right man?

It was recently revealed that Danny would be taking a break from the show at the start of next year as he prepares to tread the boards in a new theatre production.

He will be appearing in ‘A Slight Ache’ and ‘The Dumb Waiter’ from 31st January and 23rd February 2019 alongside another famous face, Martin Freeman.

Martin, of Sherlock and The Office fame, will be joining Danny on stage at the Harold Pinter Theatre in London’s West End.

Let’s hope that Mick’s stay at Mer Majesty’s Pleasure doesn’t become too long-term, but with Stuart’s vendetta against the Carters looking unlikely to end any time soon, things are looking bleak for Mick.

EastEnders airs these scenes this week.

Do you think Mick will be going to jail for a long time? Leave us a comment on our Facebook page @EntertainmentDailyFix and let us know what you think!