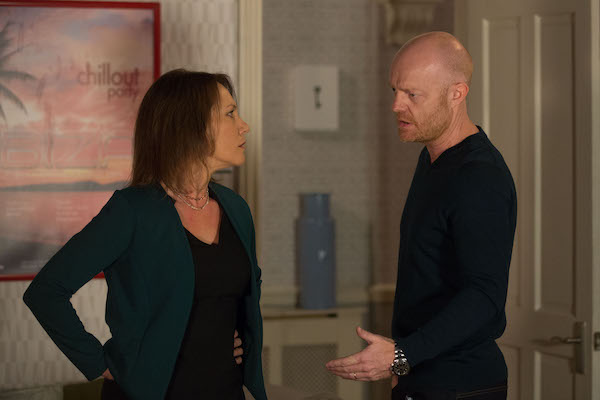 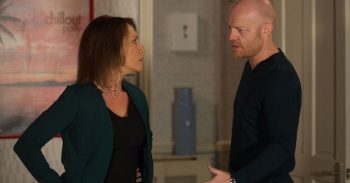 EastEnders SPOILER: Max is back with a bombshell for Rainie!

How will Rainie feel seeing him again?

Max Branning returns to Walford next week, but how will his estranged wife Rainie feel about seeing him again after all this time?

After it was revealed that Max Branning’s stay in France had been extended thanks to a holiday fling with a French school teacher, Rainie’s nose was left well and truly out of joint.

But as her broken heart had lead her to consider hitting the booze once again, she has managed to pick herself up and get her life back on track.

However, that’s all about to change next week when Max returns, leaving Rainie conflicted over her feelings for her fake husband.

As Max makes himself at home in Walford once again, he tells Rainie that he wants them to move on as a couple.

So clearly his French fling didn’t work out… but what will Rainie say when Max drops this latest bombshell?

A fuming Rainie is left to mull over Max’s words, but soon Max has bigger problems to worry about when Ben Mitchell tries to make trouble by telling Jay he still legally owns the car lot land and offers to help him fight Max to get it back.

As Ben puts the pressure on Jay to win back what is rightfully his, it is clear that he has got a hidden agenda.

But with Ruby looking out for Jay by getting him an appointment with a financial advisor, could Ben’s plans to get one over on Max be thwarted?

As Ben cooks up trouble, Max tries to make amends with Rainie by taking her out for lunch.

But while they’re trying to enjoy their time together, Max can’t help but feel Ben watching them, and he instantly knows something is amiss.

And Max doesn’t have to wait long to find out what Ben’s problem is, because by the end of next week he is left shocked when Jay and Ben confront him about the fact he doesn’t own the land his business is on.

But how will the Brannings react to the news the papers Jay signed weren’t legal?

Are you glad to see Max back? Leave us a comment on our Facebook page @EntertainmentDailyFix and let us know what you think!