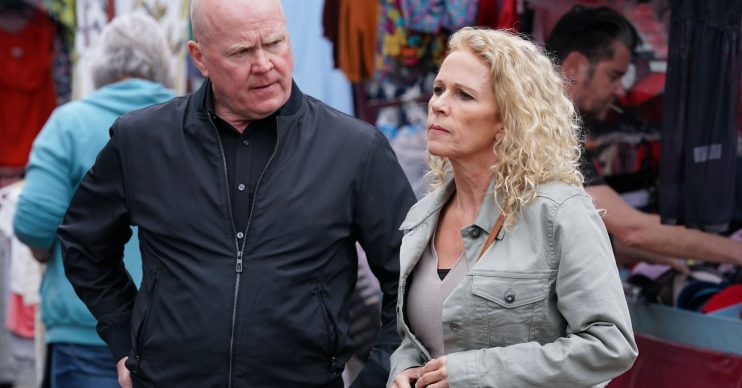 She's back with a huge secret

Lisa Fowler is back in EastEnders next week, but her return to Walford isn’t a social visit.

When Louise Mitchell and Keanu Taylor went missing after the deadly attack on Phil Mitchell at The Arches, it didn’t take people long to work out that Lisa was the key to tracking them down.

Next week sees everyone’s suspicions confirmed when Lisa makes a shock return to Walford to beg best friend Mel for her help getting Keanu and pregnant Louise out of the country.

Mel is just about to make her exit from Walford with fugitive son Hunter in the boot of the car, determined to flee the country before the police track him down.

But before the pair can make it off the Square, Lisa stops them in their tracks and tells Mel she needs her help.

Mel is thrown when Lisa asks for her help getting Louise and Keanu out of the country, and soon Mel’s suggesting that they all leave together.

But while Mel is thrown when she realises Hunter has gone missing, Louise and Keanu are keeping a low profile close to the Square.

Louise is desperate to stay hidden, but Keanu is determined to settling his score with Ben for framing him for Phil’s attack and heads off to find him.

But let’s hope Lisa wasn’t hoping to keep her return to Walford a secret, because her cover is soon blown when Ian tells Phil the Lisa is back.

Phil immediately realises that her return has got something to do with his missing daughter and isn’t going to let Lisa off the hook that easily.

Phil gives Ben the job of trying to find out more about Lisa’s reasons for coming back, but he is soon confronting his ex himself when he barges in to see Mel and Lisa and demands to know where Louise is.

It doesn’t take Phil long to realise that Lisa is lying and he works out that Louise isn’t far away from the Square, but as Lisa defends herself against Phil, Mel is preoccupied about the fact she still hasn’t tracked down Hunter.

After Phil sees Ben and discovers Keanu is back, he knows that Louise won’t be far away and demands that Lisa contacts their daughter and gets her to come home.

But little does Mr Mitchell know that Keanu and Louise are planning to exit the country for good, and they’re just back to say their final farewells.

As Keanu explains to Keegan why he is leaving, the pair share an emotional goodbye… but before Louise and Keanu can make their big escape Sharon arrives and their plan is uncovered.

But with Sharon secretly carrying Keanu’s baby, will she let the father of her child leave the country, or will she manage to persuade him to stay put?

Are you glad Lisa is back in Walford? Leave us a comment on our Facebook page @EntertainmentDailyFix and let us know what you think!