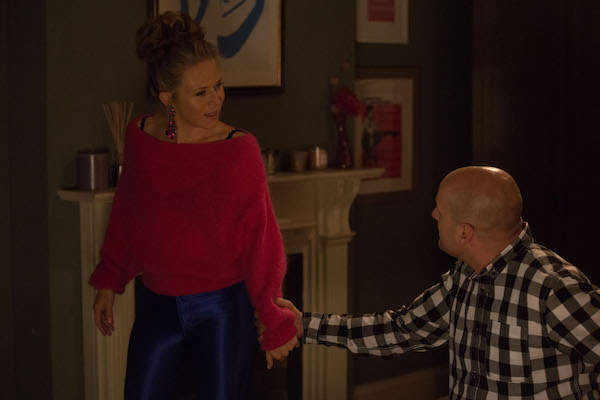 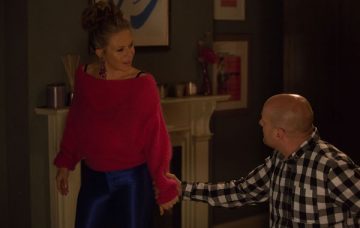 Just how far will Linda go to free Mick?

Linda Carter is forced to step up her game plan next week, and decides the only way to get a confession out of Stuart Highway is to seduce him, starting with a kiss – and it doesn’t end there.

The desperate landlady has been trying to get evil Stuart on side for weeks, playing a very long – and very dangerous – game to try and get him to confess to setting up Mick for his shooting.

But as Stuart revels in playing Mick behind the bar in The Vic, Linda realises that she needs to take some drastic measures if she’s going to get her husband home before Christmas.

Next week Linda gets the pub Christmas grotto organised, a Carter tradition that Mick loves. But try as she might, Linda can’t help but feel horrified when she sees Stuart dressed up as Santa – a role that Mick always took on with pride.

Linda also can’t help feeling guilty when Whitney reveals Ollie is missing his dad – and things only get worse when Shirley and Tina come back from visiting Mick in jail only to reveal that he refused to see them.

Shirley might be in on Linda’s game plan after discovering what she’s up to recently, but that doesn’t mean she’s any good at being patient.

Determined to get Mick out of prison, Shirley tells Linda to up her game, and if she doesn’t have a confession from Stuart by the end of the week, she will start doing things her way instead.

Knowing she doesn’t have long, Linda has no choice but to ramp up her plan. And what is the best way to get Stuart to start talking? Kill him with kindness and make him feel wanted, of course!

Linda sports her opportunity when Stuart senses all is not well with his frenemy’s wife after her argument with Shirley.

Linda covers what their fight was about, and before she knows what is happening, her plan is working as the pair share a kiss.

But while this is what Linda had planned all along, she still can’t cope with her disgust and rushes from the room.

The following day Linda is still reeling from the kiss, but she is left panicked that her plan is falling apart when Stuart tells her their kiss shouldn’t have happened and that they both respect Mick too much for anything to happen.

Terrified that she is losing her grip on Stuart, Linda pleads with him to carry on helping with the Santa’s grotto, and he eventually agrees.

But not everyone is happy to see Stu dressed up, complete with Father Christmas beard…

Jack Branning is fuming when Stuart gets too into character and starts promising kids anything they’d like for Christmas… something that only cements Linda’s hold on Stuart as she stands up to him when the locals rally.

But as the pair share a night cap after closing that evening, it looks like things are about to get very cosy indeed.

Speaking to Metro.co.uk Kellie Bright, who plays Linda, revealed: “There is a plan and it doesn’t just involve her hearing a confession. There is more involved than that. You’ll have to watch and see what happens!”

It’s clear both Linda and Stuart are playing games, and with the scene set for a special two-hander on Thursday December 13, who is going to win in the end? Can Linda get that much-needed confession from Stuart before he works out he’s being played for a fool?

Do you think Linda is playing with fire? Leave us a comment on our Facebook page @EntertainmentDailyFix and let us know what you think!