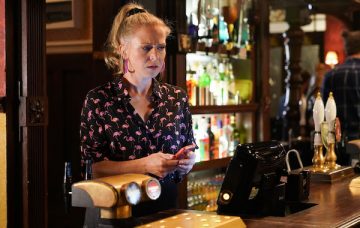 Has she abandoned her family altogether?

Linda Carter turns on her family next week when she sacks Ritchie Scott and meets up with Stuart Highway in secret.

Linda is adamant Mick is guilty and still refuses to visit him in prison to hear his side of things.

Despite Tina and Halfway’s best efforts to convince her otherwise, Linda removes her wedding ring, signaling it really is over.

Left alone, Linda soon finds herself with another visitor in the form of Stuart who wants to talk. Linda allows him to stay and it looks like she’s softening even more towards him.

He later sends her a text message thanking her, but how will she respond?

When Ritchie arrives at The Vic the next day to give an update on Mick’s case, she starts by telling Linda he needs to plead guilty.

But Linda shocks everyone when she says she doesn’t care what he does and Ritchie’s services are no longer needed.

Tina can’t believe they’re sacking Mick’s lawyer and begs Linda to reconsider, but Linda is adamant it’s not up for discussion.

Convinced something is going on, Tina gets hold of Linda’s phone – with a bit of help from Whitney and Halfway – and makes a worrying discovery. What has she found out?

Tina’s more determined than ever to get to the bottom of what’s going on with Linda, so follows her. She’s shocked when she finds her meeting up with Stuart at a cafe. Not only is she meeting Mick’s nemesis, but the greeting between them is warm and friendly too – what is Linda playing at?

Unable to contain her anger, Tina storms in and demands to know how Linda can be so pally with evil Stuart. She lashes out at the bully, but whose side will Linda take?

Later on everyone’s back at The Vic and Linda decides enough is enough. Taking decisive action, Tina, Halfway and Whitney are shocked at what Linda does next.

The Carters are in complete crisis and now it seems Linda has deserted them, can the family prove Mick’s innocence? Or will Stuart win?

And what is Linda playing at? She lost many fans a few weeks ago when she turned her back on Mick and decided he could rot in prison. But surely after all Stuart has done she can’t believe his lies?

Is this a ploy to get close to him and expose his true colours? Or is she really falling for his act?

Come on Linda, you aren’t that stupid, surely?!

Should Linda have given up on Mick? Leave us a comment on our Facebook page @EntertainmentDailyFix and let us know what you think.

EastEnders airs Monday and Friday at 8pm and Tuesday and Thursday at 7.30pm on BBC1